Today’s a big day for my circle of friends – launch day, for JD March’s first book in the Devil’s Own series, Dance With The Devil. I’m delighted to welcome JD here, and not only because I was involved in beta-ing the book and I loved it (my REVIEW HERE). I know *just* how dark, dangerous and sexy the antihero, Johnny Fierro, actually is. Obviously that’s a treat for everyone, but really, I’m delighted because JD is a real-life, very dear friend and it gives me great joy to celebrate today and hand over the blog for JD to tell us about adventuring in cowboy country. I can imagine nothing finer than being a cowboy for a while and then writing the most *stoating* western afterwards…

I’d like to extend my gratitude to Anna for the opportunity of posting a blog here to mark the publication of my first novel. The second in the series “An Uneasy Alliance” is scheduled for publication next August and the third book in the series is already with the publishers. Exciting times!

There’s probably a whole generation of 50-somethings out there who were raised on a diet of those classic Western series like Gunsmoke, Rawhide and The Lone Ranger. And if they’re honest, there’s probably still a small part of them that would like to ride the range and gallop after cattle twirling their lasso.I have to hold my hand up here and confess that I am one of those people!

I’ve ridden all my life, but I yearned for those wide open spaces and magnificent landscapes featured in so many John Ford films. I was already working on the first book in the Devil’s Own series, and I wanted to experience the day to day activities on a working ranch, so I decided to live out the fantasy and head off to the Wild West for my own taste of the cowboy life.

But the first hurdle was where to go? I thought perhaps Arizona or Texas or California and started doing masses of research on the web where there seemed to be a lot of ranches all promising a vast range of different types of western experience.

Luckily for me, I kept coming across a British based company called Ranch Rider and I decided to ring them and ask for some advice. They offer a range of ranch holidays from British Columbia to New Mexico and all points in between. But even better, their sales director has visited them all and pays a return visit every year or two. His main concern was to discover what I wanted from my trip so that he could make appropriate recommendations.  So I told him, I wanted the real deal, not some Disneyfied and sanitised version of a ranch. I didn’t want a dude ranch, I wanted an Adventure, definitely with a capital A.  He promptly told me that no, in fact I didn’t want to go to Arizona, Texas or California.  “What you want,” he assured me, “is Wyoming or Montana.”  He even narrowed it down to two specific ranches which would give me the authentic experience I was looking for.

So, Wyoming it was and the Klondike ranch in particular. Klondike is most definitely a working ranch – it’s been operating since the 19th century, and the Tass family has been welcoming visitors since the 1920s. The ranch occupies 1800 acres in the Big Horn Mountains. The family run cattle the traditional way, constantly moving cows and calves to new pasture, driving them up to 10,000 feet in the spring and bringing them down to home once the first snows threaten early in the autumn.

At Klondike you become a member of the family from the moment they pick you up at the airport. You eat together, work together and play together. On the first morning, guests are allocated horses and, just as important, appropriate saddles.  My Mexican cross-western saddle dated from the turn of the century – the 19thcentury!  Complete with wooden stirrups, a vast pommel and high back, I can honestly say that even on days where we spent eight or nine hours in the saddle, I didn’t have a single ache.

But the real joy was my horse Dixie.  A well-bred Quarter horse, Dixie can claim three champion Quarter horses in her immediate forebears, and was the most sensible, intelligent horse I have ever ridden. But all the horses were well mannered – it made me realise just how neurotic many of our British horses are by comparison.

Having been allocated our horses and saddles, it was time for the real work to begin. And it began early. Breakfast was regularly served as early as 6am, and if the day ahead was going to be a long one, it could start as early as 5am. Sometimes we would trailer the horses up to the top of the mountains, other days we rode up, and sometimes we camped out under the stars. Our time was spent rounding up hundreds of cows and calves from a vast area where they had scattered themselves during the summer months. We rode through fragrant sage brush lower down in the mountains, but further up there were dense pine forests, moose, elk, coyote, antelope and eagles. There are also bears, but luckily we never encountered one.

One of the many highlights was the day we drove 800 head of cattle to a holding pasture and which necessitated moving them along two miles of the main highway which crosses one part of the Big Horn Mountains. But what made it special was that tourists, driving across, stopped to take our pictures, because for them, going to what is dubbed the Cowboy State, seeing a real cattle drive made their holiday!  I was banned from speaking to them – no one wanted to destroy the illusions that we were anything other than “real” cowboys and we all knew that my English accent would be a dead giveaway.

Having spent the week collecting up the cattle, we then had to drive them down an old, washed out stage coach route down the mountains.  Narrow, and very steep in places with loose scree, you needed to trust your horse.  But surefooted and sensible, they never seem to put a hoof wrong.

And to be up in those mountains in the grey light of dawn, clutching a mug of coffee in the heavy frosts and seeing the sun come up, was incredible. I am completely hooked and now consider a fall round-up an essential part of my year. If only I could stay forever.

It really was a trip outside the comfort zone.  It was the adventure I wanted it to be and it was most definitely “the real thing.”  Depending on what time of year you visit, the “chores” vary accordingly.  There are always cattle to move, but there are also calves to brand, barbed wire fences to mend, and animals to doctor.  And, if you’re so inclined, they will teach you how to lasso so you could, if the fancy took you, rope a steer. Mind you, roping is not for the faint-hearted – many a cowboy has lost a finger in the process!

Visitors in the summer months can also attend rodeos, very much a feature of local life, and see cowboys riding everything from horses to bulls, all hooked on that eight second ride before they fly into the dust.

I combined my trip

with touring Yellowstone National Park – the first national park in the world and home to more than half of the world’s geysers.  And after I left Klondike I flew on to Los Angeles for a whistle-stop tour of mid-California. It seemed that if I was going all that way,  might as well seize the opportunity to see as much of the country as possible.

Of course, if the luxury of a Dude Ranch is more your scene, Ranch Rider will be only too happy to recommend one to suit. But if you want the real deal, head to Wyoming or Montana and ride across the sandstone buttes, over stunning mesas and amongst the tepee circles of long-forgotten Indian settlements.

And if you’re like me, you’ll just want to go back and experience that Western life under those vast skies, time and time again. 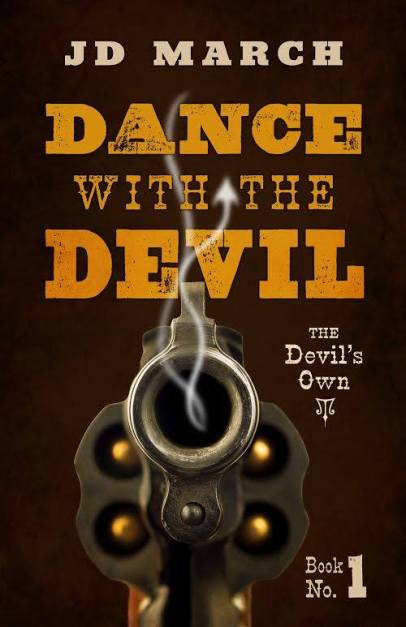 Johnny Fierro’s a gunfighter‚ maybe the best. He’s hunted trouble and a reputation all his life. But the killings and the range wars have worn him out and brought him to a point where he would welcome death — until he hears that his estranged and hated father faces a battle to hold onto his land in the Cimarron Valley. Fierro has sworn to kill his father and this is too good an opportunity to miss. What he hasn’t bargained for is a share of the ranch‚ or a brother he never knew existed. While his upright‚ authoritarian father and Harvard-educated brother struggle to come to terms with his violent past and vicious reputation‚ Fierro wrestles with the unwelcome realization that his mother didn’t tell him the whole story about the past. He doesn’t know what to believe‚ but he has to make a choice when the bullets start flying.

Dance with the Devil will be available from Amazon soon. In the meantime you can find JD at the website  –  http://www.jdmarch.com/ – and Facebook.