Rafe Lancaster is reluctantly settling into his role as the First Heir of House Stravaigor. Trapped by his father’s illness and his new responsibilities, Rafe can’t go with lover Ned Winter to Aegypt for the 1902/03 archaeological digging season. Rafe’s unease at being left behind intensifies when Ned’s fascination with the strange Antikythera mechanism and its intriguing link to the Aegyptian god Thoth has Ned heading south to the remote, unexplored highlands of Abyssinia and the course of the Blue Nile.

Searching for Thoth’s deadly secrets, Ned is out of contact and far from help. When he doesn’t return at Christmas as he promised, everything points to trouble. Rafe is left with a stark choice – abandon his dying father or risk never seeing Ned again.

e-BOOK : Universal link to a digital store near you | Payhip

PAPERBACK : Available from Amazon, or contact me for a signed copy

A fantastic book. Superbly written, with a complex plot that is as wonderfully crafted as some of the marvels we learn about within its pages….an action-filled and fascinating “Indiana Jones” sort of adventure into amazing geography and fantastical impossibility, giving us images and experiences that leap off the page with their richness of detail. – Paranormal Romance Guild

The fascinating characters, amazing world-building and the added mythology make this a perfect read for those who love steampunk and science fiction. – InD’tale Magazine

Ms. Butler is a master of the English language. She has a way of combining seldom used words and phrases without seeming the least bit pretentious. Her dialog is snappy, witty and engaging, with descriptions so perfectly drawn that you think you’re in the room, or tent, with the characters. – 2ShayReviews

Butler has crafted a unique and interesting steampunk world, and it continues to grow and evolve as the stories do…. If you’re looking for steampunk done well, and MCs that continue to grow both as individuals and in their relationship, then this series is for you. – Joyfully Jay

This book and the previous ones are so well-written, fast-paced and detailed and full of exciting adventures and enough romance to keep me engaged and captivated until the last page … Highly recommendable! – Bayou Book Junkie 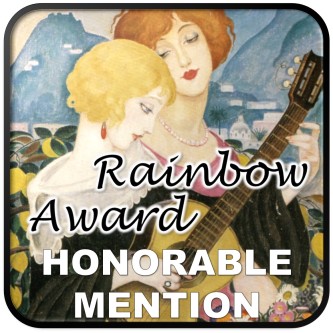 It was late, and most people in Cairo were sleeping. Not all of them. Outside in the street, a voice said something light and amused as its owner walked past, fading into laughter, and a cart rumbled by with the slow plod of hooves echoing against the midnight quiet.

We weren’t sleeping, either. Not yet even in bed.

Ned slid his hands through my hair and along my jaw, the touch light and caressing. Loving.

The curtains blew apart to let in the moonlight, stirred by a breeze bringing the scent of roses from the Ezbekiah Gardens with a faint underlay of the city’s prevailing tang of camel dung.

And the world outside our hotel window, the warm, fervid Aegyptian night, vanished away. Its sounds muted into a stillness in which my heart beat a wild tattoo in my chest. The whole universe sharpened to the nucleus that was Ned, and Ned’s hands, and Ned’s kisses.

When Ned drew back and the kisses became the gentle brush of lips against lips, he unbuttoned my evening jacket. He was a most efficient valet. He worked swiftly, slipping the coat from my shoulders while I wrenched away my cravat myself, tossing it over a nearby chair before tugging the hem of my shirt free of my trousers. I smiled at him as I raised my arms, letting him pull the shirt up over them. It joined the jacket on the chair. Hugh would tut-tut in the morning over how creased it was. Not that I cared.

Ned stopped to look at me. His eyes were eclipsed, the greeny-golden hazel a mere corona around his dark, widened pupils, and his breathing was harsher than normal. He licked his lips, his tongue flickering out to pass over their fullness. I bit back the moan the wicked, lascivious sight drew from me. The pure wantonness of it.

Ned gave me a sly little smile and ran his tongue over his lips again. I might have whimpered. I am as affected by beauty as much as the next man.

Our last real night together. The next day I would take them to Hermopolis, and the day after I’d be returning to Cairo alone. The following five months’ worth of nights would be Ned-less, blank and empty. That night in Cairo was to treasure and savour, to be my bulwark against loneliness.

He skimmed his fingers over the skin under my trouser waistband, round from the small of my back and over my hip bone, making me jump and laugh, until he reached the button fly and worked it open. It was good to step out of them, and it was the work of a few seconds to shimmy out of the cotton drawers I wore beneath. Ned watched me, raking his wide, lust-blown gaze up and down.

I licked my lips. “Either I’m underdressed for the occasion or you need to hurry to catch up.”

Ned laughed. He splayed his hand over my chest, fingertips over my thumping heart. “You’re beautiful. And I am overdressed.”

For a man who’d had a valet all his life, Ned was handy at getting out of his clothing in a trice. It was sheer pleasure to watch the swift unveiling of those long limbs and the pale skin which glowed in the soft light of the aether lamps on the table beside the bed. The scar from the accident that killed his wife, jagged and frosty-white, arced around his chest. The sight of it always hurt. Ned could have died that day, and I’d have lived without knowing him. The thought always left me feeling my heart was plummeting through the bottom of my chest. As I often did, I leaned forward to gentle the scar with my mouth and hands. The faint ridges of the damaged skin reassured me. Ned was alive. Loved.

An excerpt from an earlier chapter, read by the lovely Angel Martinez. Angel’s a great author, and you can find more of her books (and her readings!) at her website.

The Lancaster’s Luck series is set in a steampunk world where, at the turn of the twentieth century, the eight powerful Convocation Houses are the de facto rulers of the Britannic Imperium. In this world of politics and assassins, a world powered by luminiferous aether and phlogiston, and where aeroships fill the skies, Captain Rafe Lancaster, late of Her Majesty’s Imperial Aero Corps, buys a coffee house in one of the little streets near the Britannic Museum in Bloomsbury.

To find out more about Rafe’s world, use the Lancaster’s Luck drop-down menu above.