Writing as organic growth – or dammit, I *liked* those bits…

No, not quite like a mushroom, although there is a sense of tendrils creeping all over the place, like mycelium, that may one day produce a fruiting body that is your novel.

I was really thinking of the pros and cons of outlining/planning vs seats of the pants writing, and how with the best will in the world, your outline will get hijacked by something that grows organically as you’re writing. The Gilded Scarab, the current WIP, is a case in point. When I started out to rewrite the coffee shop novella into a full novel, I had pretty good idea where it was going to go. From being a 20K word story set almost exclusively in a coffeeshop near the British Museum, it’s now planned to be a steampunk, turn of the 20th century Egyptian (well, Aegyptian. See ‘steampunk’, above, for my excuse for youneek spelling) mystery romance.

The reasoning went thus: the coffee shop romance made a reasonable novella but (i) modern day coffee shop romances yawn yawn done to death yawn yawn and (ii) there was not enough plot there to expand it into a novel. Not even a short novel. So, I took the job of the hero (archaeologist and curator at the Museum) and expanded the story outline to encompass scenes in Egypt where there’s a mystery/murder/mayhem theme and involve the hero’s love interest (ex pilot, now coffee shop owner) to pile on the drama and maybe even a little bit of angst.

Then: “Oh,” said my brain, “remember how much you’ve always liked the thought of writing a steampunk novel where you can have fun with aeroships and luminferous aether? Here’s your chance. Set it in 1900 or thereabouts, in a Britain ruled not by an elected government, but by a convocation of oligarchs – the Convocation Houses – so you can mix in steam and ray guns with House politics and jockeying for power. Make your hero a reluctant player in all that politics and wot larks you can have!”

All cool so far, right? Yup. I thought so, too. 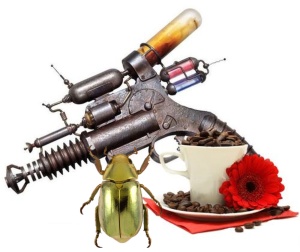 Then I came to realise that the hero’s backstory in the novella just wouldn’t work in the expanded novel. In the novella, I dealt with Ned’s first lover (also an archaeologist at the museum) and his short lived marriage (wife killed in an accident leaving him with her son to bring up) in a  couple of pages. Neither were really important to what little plot there was except  (i) in Daniel’s case, be a wonderful excuse for Rafe, the coffee shop owner, to say the words “pumpkin spiced double-shot dry latte with an extra pump of sugar-free vanilla and chocolate sprinkles” without dying of terminal shame at how ridiculous that is, and (ii) in Laetitia’s case, to provide Ned with a stepson so that he and Rafe could have the requisite ready-made family that m/m romance readers love.

But being so cursory and cavalier just won’t work now. The Aegyptian element of it is still a bit unformed, but will certainly involve the Gilded Scarab of the title. It’s important that Rafe is there with him, and it’s important that Daniel is too. So Daniel has to be a full, rounded character with a personality of his own and can no longer be introduced and dismissed in a couple of skimpy paragraphs.  I’m in the process of writing all this now and as of today, I am 16,000 words in and Daniel and Ned have just had sex for the first time.  I still have to bring their affair to an end and marry Ned off to Laetitia, who can no longer be a single mother whose child Ned adopts, but must (for reasons of House politics and Ned needing a legitimate heir) be the mother of Ned’s two sons, Harry and Jack, before I kill her off in her accident. At this rate, Rafe isn’t even going to make an appearance until about chapter 8 and possibly another 10,000 words.

Which brings me to the reason I’m beating my head off the proverbial brick wall.

The original novella had sections from Rafe’s PoV, that I am really, really sorry to lose. I could have expanded those beautifully to put them into the steampunk universe, and he’s a lot of fun, is Rafe, and a joy to write. But I don’t think that I can introduce a second PoV character so late in the novel, can I? Not and expect it to work. I’m already struggling with the notion that introducing the main love interest so late is problematic, without me then switching to his point of view.  At least if I keep it all in Ned’s PoV throughout, it makes the story more an account of his life and therefore easier to accept that, for Ned, what happened with Daniel and Laetitia was terribly important to him in forming the man who will later meet and love Rafe.  I am going to have to keep this one as a single PoV throughout, and all my lovely Rafe passages will have to be sacrificed. Colour me sad at that.

Still, I suppose that when Gilded Scarab is available, I could always do the Rafe chapters as a sort of remix free extra, couldn’t I? I quite like the possibilities of that. I could post the Rafe chapter here as a freebie as a taster of Scarab itself. That might be good.

Which long winded tale, is my way of saying that even when you do have a cunning plan, there is many a slip etc etc etc.

Or, even more concisely: DAMN.