It is a *huge* mistake to catch a chest infection (thanks, Mum!) the week before you go off to Bristol to enjoy a weekend in the company of fellow writers and readers of LGBT fiction. Huge. It means that you hack and cough your way through the day and, come the evening’s entertainment, you manage to last out the drag queen (gosh, what a figure and a fabulous frock) but don’t make it through dessert. Which, you know, sucks balls the size of planets. Not least because dessert was chocolate torte and the waiters had no clothes on.

Ill health and mad coughing aside, it was a really great two days.  I met up with old friend and fellow writer Sarah Granger, whom I hadn’t seen for far too many years and was horrified delighted to see that she has worn a great deal better than I have. And I was also delighted to meet writer Megan Reddaway who has a deliciously funny story, Wrong Number, in the new Dreamspinner Not Quite Shakespeare anthology. I’m hoping to entice Megan here to tell us a little bit about it.  Watch this space.  No photos of the three of us, sadly, because we’re all introverted geeks and clutched our pearls – or rather, our white ‘no photographs please!’ lanyards – every time a camera hove into view.

I spent a half-hour on the first morning helping to fill the swagbags. There was a really inventive

range of things on offer from my fellow authors. I only brought pens. Admittedly, we’re talking nicely swish US pens that you can’t get over here, but I was blown away by the stuff other people came up with. Tiny little tubes of Love Hearts were popular (with me too! I’d forgotten how sweet they were), but the palm for inventive sweets goes to Clare London for the slices from a stick of rock with her name running through it. That was neat. As for the less gastronomic offerings,  I particularly liked the rainbow lei, the tiny bottle of bubbles with a blower (remember those?!) and I’m now set up with pens for the next year and with little organza favour bags which will make great lavender sachets for my undies drawer. A great haul, as you can see – points upward to photograph where it’s all piled in artful confusion – and I’m still sorting over it and cooing over the pretties now I have them at home. It has me thinking very hard about swag for next year, when I hope to have Gilded Scarab to promote. I’ve been looking hard for about 150 faience scarabs at a price that won’t break the bank. Although given the way that the LGBT weekend keeps growing in numbers, I’d better think about 200 scarabs. And one golden one for a speshul prize.

(Short pause while I hunted out the little bottle of bubble mixture and blew bubbles all over my computer monitor and the dog. The monitor was indifferent. Molly snorted and tried to eat her bubbles. But then… dog. They try to eat everything.) 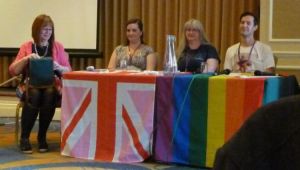 There was a full programme of panels and discussions, starting with, well, the starting words for a range of novels, read by their authors. The differences in styles, moods and approaches were fun but the basic message was very clear. Grab the reader in the first 150 words.

I wasn’t involved, of course, but here’s the opening words of Gilded Scarab – at least in the first draft. It needs tightening up, of course: Whenever someone asks me how I came to own the finest coffeehouse in London—and they do, since far too many people mistake their curiosity for a right to know everyone else’s business—they get my most charming smile. I know it’s charming because I practice it every morning in my shaving mirror. It’s devastating. And even more effective without the shaving soap.

One brilliant panel was the one on marketing, because it made me go all

about this website. Points waaaayyyy up there to the pretty header. Does that say science fiction writer to you? Uh-huh. Me neither. Time to do some rethinking about that. But the really most usefullest panel of all was on contracts. I am hoping they write that one up, because KJ Charles, who chaired it, is shit hot on on knowing what to look out for and ask for. And rather acidly funny, too.

I didn’t have anything for the book fair, although I hope to have both Shield and Scarab for next year.The darling Sarah Granger did, though, and offered to give space to my table banner for FlashWired. She was the one who told me about the banners and she had one done for her own wonderful Minor Inconvenience. Don’t they look smart? 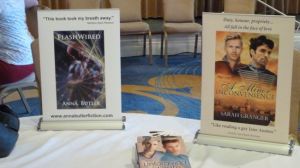 Really a great weekend and I’m only cross that I felt that I’d been hit by a bus throughout it. Next year I’ll definitely be doing some prophylactic self-medicating to keep the bugs at bay. A few stiff cocktails should do it.