Vigoro—or why research is good for your health

One of the delights of writing, it seems to me, isn’t about publication and sales and all that jazz—though of course those are hugely, hugely, delightful things that make it all worthwhile. What I mean is there are other things that, to quote my favourite teacher, ‘bewitch the mind and ensnare the senses’ and that can be ranked right up there as one of the rewards of a writer’s life.

Oh, I know. A lot of people sigh, gird up their loins, and plug at it as a job that has to be got through to give them enough understanding to get on with the story they want to write. Often I’m like that, too. I need to know what gunmakers other than Colt were active in the American West, just for a passing reference? Cool. Do that, drop the reference in (He hesitated over a neat .44 Smith and Wesson he hadn’t seen before—a new model, called the Russian, said Zimmermann—but put the other Smith and Wesson pistols and the Remingtons to one side. The Le Mat wasn’t worth looking at.) and move briskly on. Same with racehorses and riders in the 1899 Boxing Day races at Kempton Park: look ‘em up, drop them in, congratulate yourself on adding ‘merely corroborative detail, intended to give artistic verisimilitude to an otherwise bald and unconvincing narrative’.

But now and again, you come across an article, a reference, a thing that is so thoroughly delightful that your day is brighter just for knowing it.

When I was writing Gilded Scarab (and as an aside, don’t you *hate* the waiting period while the publisher is looking at it and hasn’t yet given you either an offer or a ‘bugger-off-Anna’ response?), one of the absolute joys was the Ordnance Survey Map of London of 1893-6, which superimposes over the modern map and works in much the same way as Google Maps does. I spent hours and hours over that, working out Rafe’s route to Daniel’s rooms in Kings Cross, for example, or Ned’s route from Belgravia to the British Museum. I was gobsmacked to find that Coptic Street was known as Duke Street then. Who knew? Making that change to my draft made me feel rather… smug. Historically accurate, and smug.

This too, was a great find: the 1894 plan of the British Museum. Very useful for plotting out my hero’s route through to the basements in a power-cut, to rescue Ned from the baddies.

Now, I’m not seriously researching the second Rafe and Ned book yet. I’ve almost finished the revision of the third Shield book and I want the fourth in the bag before I turn my attention to The Dog Who Ate Millions. But I do keep my eye open for things that will be relevant. So god bless the BBC and their quirky, eclectic online magazine. Today’s article: Vigoro: The Edwardian attempt to merge tennis and cricket 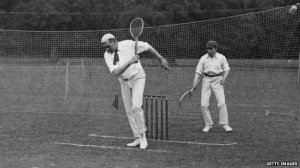 They had the bowler (server? Pitcher, for my US friends) deliver the ball by serving it with a tennis racquet. He served the ball to the batsman using a tennis racquet. The sheer WTFery of that is… well, using that overused adjective-du-jour, delightful.

My favourite line is “Fielders were expected to catch the ball by holding the racket at an angle and lobbing it in the air, then bringing it to rest on the face. They returned the ball by whacking it in.”

I want to go and see a game of Vigoro, dammit! I wanna go and see it.

The best I can do is make sure I use it somewhere. I’m going to have to cheat a bit and bring it forward to 1900 (1902 is a little late for my story) but I swear by all that is holy that if I can’t go to see a game of Vigoro, Rafe and Ned ruddy well will.

And they will cheer and clap and be entranced. Just the way I am. 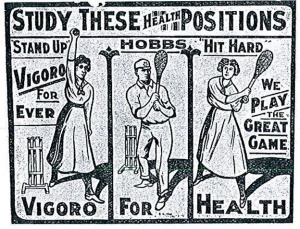 And on another note, the first Shield book, Gyrfalcon, is likely to be published on a Wednesday in January next year. I don’t know which Wednesday, but still. A Wednesday. I love Wednesdays.