No, not me. Just as well since we’re skint and you’d all have to pass the hat to get me out again. Held for Ransom is Layla’s new book, and I’m delighted to welcome her here to talk about it. Not to mention, she’s giving us a sneaky little peek into it… Over to you, Layla!

Hi Anna! Thanks so much for having me!

A good friend of mine once described the general theme of all my fiction as “finding home”. I think that’s a great way to put it, although home means different things to different people. It can be a place, it can be a person …. it can even be a spaceship, as any Firefly fan knows!

But “finding home” is very much the theme of my new novel Held For Ransom. It’s the story of a drifter, Ransom, who wanders into a small town, has a one-night stand with a local, and just might have found a place to lay his head for more than one night. And it’s the story of local kid DJ Lanning, who’s always had a home but never quite fit in, finding out that for him, “home” just might be wherever DJ is.

Ransom killed the motorcycle engine outside 324 Elm Street and sat on the seat for a minute or two, gazing along the street at the neat rows of porch lights glimmering through the chill winter darkness. Idyllic. That’s a good word for this place. It looked to him like a set from a family sitcom, the sort where father knows best and no problem is too big to be resolved in twenty-two minutes. A part of him thought it should be possible to peek behind those house fronts to see the scaffolding propping them up and the hands scurrying around the dark backdrop of a soundstage.

He wondered what it would have been like to grow up here.

The sky was flat black, the low clouds were lit with the dim glow of some bigger town off to the northwest—Heatherfield, probably. The air had a dry, sandy taste that bespoke ominously of snow.

You should be on the road.

After a time he dismounted from the motorcycle, hung the helmet on the handlebars, patted his jacket pocket to make sure the all-important bundle was still there, and then unlatched the low gate. DJ Lanning’s house had an honest-to-god picket fence. The yard was a patch of slightly overgrown lawn with little solar-powered lights picking out the walkway. Frost glistened in their cold blue glow. It was going to be a chilly night.

He rang the doorbell and waited. He was raising his hand to ring it again when DJ opened the door—breathless and tousle-haired and lit from behind. “Hello! Hi!” he said. Then he stopped and blinked helplessly, clearly having exhausted whatever short conversational script he was working from.

“Can I come in?” Ransom prompted after a moment. “It’s cold out here.”

DJ ushered him into a living room that was all Ransom had expected based on the outside of the house. A real estate agent would probably have called it “cozy.” It was a little too small for its burden of overstuffed furniture, but the effect was welcoming rather than off-putting.

DJ snatched up a crumb-laden paper plate on an end table and scurried off to the kitchen with it. Ransom watched him go, amused, and laid his leather jacket over the fat blue arm of a cheap, overstuffed couch. By the time DJ came back with two cups of coffee, a box of crackers, and a bottle of hazelnut creamer, Ransom had staked out a place on the end of the couch. It was a very comfortable couch. Then he got to watch DJ try to figure out where it was best, politically, to sit. DJ eventually compromised on a recliner next to Ransom’s end of the couch.

“The committee ate everything in the house that wasn’t nailed down,” DJ said. “I hope you like crackers. Uh, sugar and stuff in your coffee? Creamer?”

“Creamer’s good.” He’d eaten dinner at the diner in Osmar. Typical small-town diner food. He’d had plenty of it in the last year. He watched DJ arrange crackers on a paper plate and thought that this could easily be the weirdest date he’d ever been on. If it was a date.

DJ Lanning had a soft sort of good looks. He was a little overweight—not fat but definitely padded—in the way of someone who spends a lot more time at the computer than at the gym. He wore an open-necked polo shirt, revealing a dusting of light brown chest hair. On a TV show, he would have been cast as the geeky best friend or the comic relief. He’d never have graced a calendar or glowered from a movie poster, but there was something comfortable-looking about him, like he’d always be there to come home to, offering bad coffee and earnestly arranged, slightly stale crackers.

Ransom thought he must be tired if he was having thoughts like that. Home wasn’t an option for someone like him. Not that kind of home. 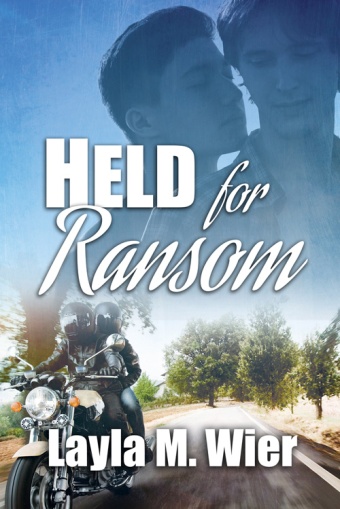 Blurb
Two weeks before Christmas, the small town of Osmar is gearing up for its annual winter carnival, but the death of the event’s long-time organizer might mean the end of the festivities. Everyone is turning to her son DJ to save the carnival, but DJ can barely save himself. He’s spinning his wheels in Osmar—working part time at the gas station, living in his parents’ house, and trying to figure out what to do with his life. DJ is caught in a large, loving web of well-meaning family and friends, but they can’t fix his life for him.

Into this mess comes Ransom, a handsome mystery man on a motorcycle. Ransom is traveling around the country, making up for his past sins by doing “good deeds.” He and DJ have a one-night stand that neither can forget, but that’s just the start, because Ransom has a plan to save the carnival, and DJ has a plan to save Ransom… and possibly himself.

About Layla
Layla M. Wier is a writer and artist who grew up in rural Alaska and now lives on the highway north of Fairbanks, where winters dip to 50 below zero and summers yield 24 hours of daylight. She and her husband, between the two of them, possess a useful array of survival skills for the zombie apocalypse, including gardening, blacksmithing, collecting wild plant foods, and spinning wool into yarn (which led to her first Dreamspinner Press novella, “Homespun”). When not writing, she likes reading, hiking, and spending way too much time on the Internet.

Where to find Layla:

Monday, Dec. 1: Because Two Men Are Better Than One – http://becausetwomenarebetterthanone.com/