I am very, very proud to show you the cover for Gyrfalcon, the first of my series ‘Taking Shield’, which recounts the loves and adventures of Shield Captain Bennet. 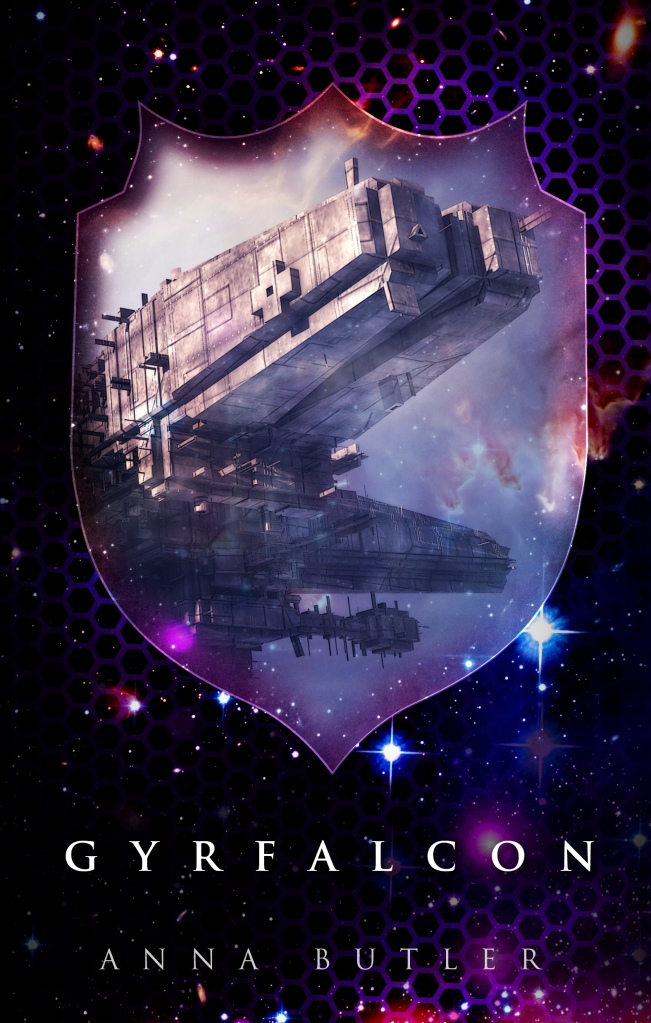 Taking Shield is set in a future where Earth is dead and gone, dark for thousands of years. Only a few escaped to start afresh somewhere else. One of her last colonies, Albion, is struggling to survive a war against the Maess.

Shield Captain Bennet’s on the front line. Actually, he’s often behind the front line. In Gyrfalcon, he commandeers a Fleet dreadnought to take him into Maess territory to carry out an important infiltration job. A job his long-term partner doesn’t want him to do. A job he can only do by commandeering the ship commanded by his estranged father. And a job he can only do with the diverting, devastating help of Fleet Lieutenant Flynn.

Bennet’s life will never be the same again.

All the warning he got was the slightest prickling of the hair on the back of his neck, then someone or something forcibly connected with his legs and brought him down. The impact had that foul-smelling air whooshing out of his lungs.

“Stay down!” hissed Bennet in his ear. “Two drones. Right behind me.”

Flynn tried to catch his breath. Bennet, arms and legs wrapped around him, rolled them both into the shelter of the rock that he’d evidently been hiding behind. For an instant they lay in the warm darkness, wrapped together. They were in deep shadow, and Flynn had to feel for Bennet’s face to touch it, to make sure that the Shield captain was really there. His hand found Bennet’s mouth, felt it curve into a smile, and he smiled himself.

Bennet disentangled himself, so that Flynn was undistracted again. Huh. Shame. Bennet had felt pretty good. He inched up to peer carefully around the rock. The two drones were about fifty feet away and marching towards them.

Bennet was breathing hard. “One each, then let’s get the hell out of here. Take the one on the right. On my count: three, two, one.”

They rolled in opposite directions from behind the rock. Flynn fetched up on his knees, bringing up the laser and firing several sharp short bursts. His drone staggered and fell onto its back, dropping the laser rifle it was holding, its circuitry fried by a plasma bolt to the head. The remaining one stood rigidly still, sparks shooting out from its chest circuitry. In an awful travesty of a human reaction, its hands were clawing at the hole in its chest. It toppled slowly over onto its face.

“Shit,” Flynn said. “What an exciting life you lead! Any more of them?”

Gyrfalcon will be available as an ebook from Wilde City Press

I am really so very excited. Gyrfalcon – indeed, the whole Shield series –  isn’t a romance story, but it is an intense love story.  I adore Bennet and Flynn and I hope you will, too.