Indigent : a book with a charitable heart 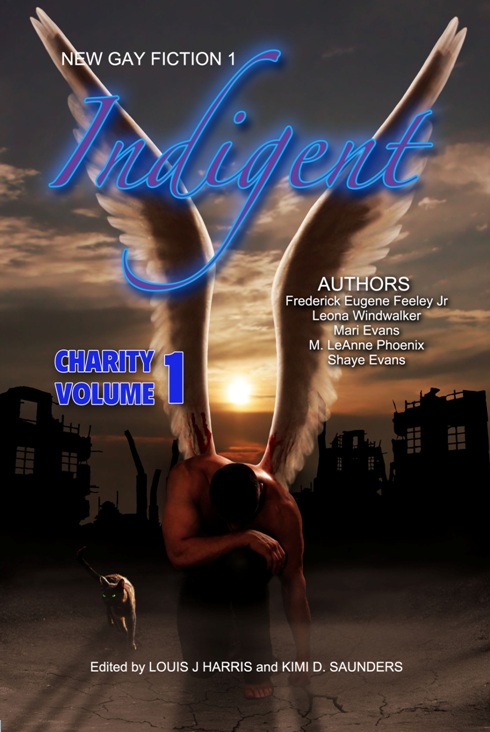 I am delighted today to be plugging a new book, an anthology published by Cool Dudes, which has been put together by a group of authors wanting to support LGBT charities across the world. **Proceeds from the book will be divided between the following four charities**:

GALA is a centre for lesbian, gay, bisexual, transgender and intersex (LGBTI) culture and education in Africa. Their mission is, first and foremost, to act as a catalyst for the production, preservation and dissemination of knowledge on the history, culture and contemporary experiences of LGBTI people.
Lost-n-Found in the USA is Atlanta’s only non-profit organization dedicated to taking homeless lesbian, gay, bisexual and transgender youth off the street and into more permanent housing, Lost-n-Found Youth is dedicated to the advocacy and service of youth from 13 to 25 years old.
Youth Off The Streets is a non-denominational community organisation working in Australia for young people aged 12-25 who are facing challenges of homelessness, drug and alcohol dependency, exclusion from school, neglect and abuse. We support these young people as they work to turn their lives around and overcome immense personal traumas such as neglect and physical, psychological and emotional abuse.
The UK’s Albert Kennedy Trust supports lesbian, gay, bisexual and trans homeless young people in crisis. Every day they deal with the the effects homelessness can have on young people’s lives.

Five authors have joined together to produce stories evoking both loss and hope. Reaching deep within their fiery imaginations, these stories take flight and showcase dreams for a better today and future for LGBT everywhere. Embodying a diverse set of talents and stories, this volume sets out to grab the hearts of those who read the m/m genre and to offer hope to LGBT across the globe.

Frederick Eugene Feeley Jr’s “Indigent”, after which the anthology takes its name, brings the reader to witness an apocalyptic war between the good and evil that rages in one man’s mind. Soon he will know that his problems are insignificant compared to those of others.

Mari Evan’s “Stumbling into Forever”, involves a handsome young vampire who will learn that just a sip of blood is the difference between love and freezing to death.

Leona Windwalker’s   “If Only the World”, takes rejection to another level. A heartbreaking story that is turned on its head by the kindness of strangers.

Shaye Evans’ “Rescued”, is a contemporary social statement about the aftermath of a young man’s life after his drink has been spiked at a bar.

LeAnne Phoenix’s “Higher Love”, takes us on an almost spiritual journey through the minds of two people who have never met, but have spoken on a telepathic level. When they do come together, that bond is already cemented but there is a price to pay.

Well, about all five…

Frederick Eugene Feeley Jr (F.E Feeley Jr) was born and raised in Detroit, Michigan and lived there for twenty years before joining the military. He is a veteran of the US Armed Services; having done a tour in support of Operation Iraq Freedom in 2002-2003, he turned college student, pursuing a degree in political science. He now lives in Southeast Texas where he is married to the love of his life, John, and where they raise their 1½-year-old German shepherd, Kaiser.

As a young man, reading took center stage in his life, especially those novels about ghosts, witches, goblins, and all the other things that went bump in the night. His favorite authors include such writers as Stephen King, Dean Koontz, and Anne Rice, whose work allowed him to travel to far off places and meet fascinating and scary characters. As a gay man, he wishes to be able to write good fictional literature for those who love the genre and to write characters that readers can relate to. All in all, he is a cigarette smokin’, whiskey drinkin’, rock and roll lovin’, tattoo wearin’ dreamer of a man with a wonderful partner who puts up with his crap and lets him write his stories.

Mari Evans  a wife and the proud mother of a very active daughter, two dogs and two cats. She’s a very social kind of girl, who loves to talk. It’s both her best and worst quality.

From the moment she could read, she devoured books. Anything goes, as long as it has a happy ending. There were always stories swirling around in her head and as a child she liked to lay in bed and let the characters have their story and happy ending. It wasn’t until 2013 that she actually tried to put one of the whole stories down and submit it to a publisher. To her own surprise and excitement it was accepted. This gave her the drive to keep going.

The decision to write m/m was made when a friend told a story about a young gay man that struck a chord, even as her husband had already encouraged her to try it earlier. Now she found her passion, having already found the love in her family and friends, her life is completely chaotic, crazy but wonderful.

Shaye Evans is a proud Australian and best selling author of the M/M Romance genre.At age nineteen, Shaye found her love in the m/m genre when she read her first M/M and was instantly hooked, but it took her an entire year to begin writing her own. She has had five of nine short stories accepted to be published in 2014 alone. Something she is very proud to admit—and who wouldn’t be

When not writing or plotting her next piece, Shaye keeps busy by either reading one of over four-hundred books in her collection, designing her next book cover, or shopping. She one day dreams of being a paramedic and her books making it to the movies!

Leona Windwalker is a long time staunch supporter of human rights and environmental causes. Her favorite genre is m/m fiction and she particularly enjoys the sci fi, fantasy and action suspense sub-genres, especially if they have a nice seasoning of romance. She has far too many books on her Kindle, has overloaded her phone with even more, and when not reading, writing, being driven to distraction by her children, or being overlorded by her three cats, spends time trying to locate the portal that the sock monster uses to steal socks from her dryer.

M. LeAnne Phoenix was born and raised in Fort Worth, Texas in the mid-1970’s.  Ms. Phoenix was young and wild (and even free!) during the crazy wondrous decade known as the 1980’s and the even crazier but now grungy decade of the 1990’s. Music is second only to the muses that live and breathe to fill her mind with beautiful men, and music always helps them to tell their stories. She is never without her iPod or her computer no matter where she goes, although, she does like to hike and take pictures of the sky and the moon, and even the occasional shot of the sun through the branches of a tree.

An avid cat lover, Ms. Phoenix has been owned by many throughout her life, though her current owner is one Lily-Rose, who really would like for her to step away from the keyboard and pay her some attention! After all, hasn’t she earned it?
Find Ms Phoenix at her website,  Facebook and  Twitter 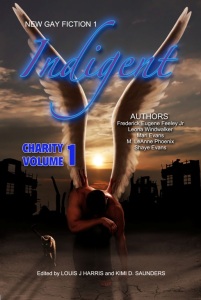 Indigent is published by Cool Dudes Publishing. You can find Cool Dudes on Facebook
The anthology was edited by
Louis J.Harris, who lives in Germiston, South Africa. He has published three novels, “Stars Fall”, “Revival”, and “Swimmer”, his short stories have appeared across the globe. He is the owner of CoolDudes Publishing and has been an affiliate member of the South African Professional Editors Group.

To schedule author readings, signings, or other author events (virtual or live), please contact Louis J Harris at CoolDudes Publishing via email louisjharris@cooldudespublishing.com or by calling +27 83 784 9658