I’m delighted to welcome J. Scott Coatsworth to the blog today, to talk about his new release, The Homecoming. Actually, he’s being grilled by me as I try and extract secrets from him about his new book and the fascinating characters he’s created. He bravely submitted to an interrogation, but this first question is a purely rhetorical one: is it very wrong of me to want to keep both Aldiss and Hari for my very own?!

When his own world is destroyed, Aldiss and his crew barely manage to escape, leaving friends and lovers behind. What was meant to be an exploratory trip back to the home world turns into a mad dash for survival.

When they awaken from stasis on Earth, which was abandoned by humanity five centuries before, they must quickly learn about their new home. While exploring the region around the ship, Aldiss meets Hari, a shape-changer, whose people harbor secrets that might cost the crew their lives.

ANNA: Starting with an easy question on the paranormal/fantasy angle, what got you writing this genre in the first place? What are your influences there?

JSC: I’ve almost always loved sci fi and fantasy. I blame my mother – she got me started on Lord of the Rings back in second or third grade. Within a year, I’d read the Hobbit and all three books in the trilogy – and OMG I cried when Boromir died!

Growing up, I loved Piers Anthony and Anne McCaffrey, but when I found Sheri Tepper, I was astounded – the way her books would leave me thinking for days and weeks after.

I’ve been writing since about Fourth Grade, but didn’t have my first publishing success until last year. Now I bounce around between the “pure” fantasy and sci fi side and the “romance” side, and enjoy writing both.

ANNA: I’m wondering if we share a mother!  At least we share the same taste in fantasy writers, Tolkien and Tepper in particular. So, onward!  What inspired you to write this particular story? What were the challenges in bringing it to life?

JSC: The Homecoming has an interesting history. It started out as a short story maybe 20 years ago. When I was in high school, I built an entire world called Antana on the back of some discarded stationary. I wrote a novel about it some years after a worldwide catastrophe, a story that mixed sci fi and fantasy. Some years later, I started another story, this one about someone who escaped at the time of the disaster – thinking what if someone came home to find intelligent wolves? But I only wrote a few scenes.

Flash forward to last year, and Less Than Three Press had an anthology call for ‘Lovely, Dark and Deep’ – about things that happen deep in the forest. I pulled out this story starter and brushed it off and finished it, changing my wolves to shifters, and The Homecoming was born.

But the story doesn’t end there… the novella was rejected for the anthology, but LT3 asked me to resubmit it as a standalone. I did, and they accepted it almost immediately.

ANNA: I am awed that you literally did your worldbuilding on the back of an envelope! Tell us something we don’t know about your heroes. What makes them tick? Tell us one thing about them that we don’t learn from the book, the secret in their past.

JSC: Hmmm… well, you don’t know that Aldiss always wanted to live in the woods, but there were no woods on his home world. And you probably don’t know (unless you’re particularly astute) that Hari likes it better on bottom than on top.

ANNA: If I were a Hollywood producer about to put your book on the big screen, who would you want me to cast as the leads? Why? And can we have pictures to drool over?

I guess Aldiss would be kind of a Daniel Radcliffe sort – fairly young, kinda handsome, a little boyish. 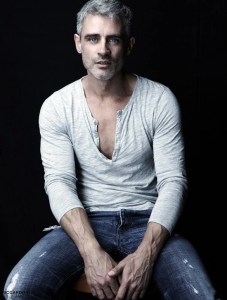 For Hari, my white wolf, maybe a younger George Clooney type? And OK, one Radcliffe photo and some other guy I think would make a good Hari…

ANNA: What secondary character would you like to explore more? Tell me about him or her.

JSC: I’m fascinated by Cat, the other surviving member of the Sapphire crew. I’d like to see who she is, where she came from. Why did she choose to go on this long mission? How does she feel about being stranded on Earth? What would she do next? There’s a story there..

ANNA: What was one of the most surprising things you’ve learned in writing your books?

JSC: That I can trust my writing. I started writing early, had some rejections, and stopped. But I’ve gone back to read some of my earlier stuff, and it’s really not bad. LOL… then this last year I sold or placed 9 shorts and novellas. It’s been a big boost to my writers’ confidence.

ANNA: Oh yes, I agree!  I would say that is one of the most fundamental, but often one of the hardest, things an author needs to learn. Believe in yourself. Believe that everything is possible. Go for it!  But because we also know that we aren’t perfect, if you could change ONE thing about your novel, what would it be? Why?

JSC: Make it longer, to explore more of the story, and where it might go from here. I really enjoyed spending time with Hari and Aldiss.

ANNA: oh boy, YES! At the risk of repeating myself – go for it!

Hari reached the edge of the woods just in time to see Neru crouching to leap at the two-legs. Young fool.

He gathered himself and jumped after Neru, knocking him aside as his teeth reached for the two-legs’ throat.

Neru turned and snarled at him, backing away toward the woods.

Hari stood firm, ears back, hackles raised, and drew the corners of his mouth back to reveal his teeth. Back off, Neru.

The whelp shook his head and grinned with the brashness of youth, until Hari leaped at him and nipped his ear. With a surprised yelp, Neru turned his head, deferring to Hari’s strength. As you say, brother. There was a cockiness to Neru’s look that unsettled him.

The other wolf backed up slowly then turned to disappear into the woods.

Hari caught a glimpse of Mavi watching from the shadows. The old wolf snarled, and slunk off after her son.

What do you seek, old mother?Hari wondered, watching Mavi’s silver-tipped tail flicker into the darkness. It was clear where Neru’s courage and cunning had come from.

Hari turned back toward the two-legs. He was holding a strange stick, not unlike the one that Hari’s grandmother had shown him in the wolf dream.

But it was his face that caught Hari’s eye. He knew that face. The two-legs’ eyes were white-gray, and his jet-black hair was swept to the side.

Despite the danger, he shifted in the manner only a few of the clan are able to do in the cold. He grew quickly taller and less hairy but no less muscled, and stood naked before the two-legs.

They stared at each other for a long moment. Hari felt an immense attraction washing over him. He saw in his summer form that this two-legs was beautiful. His own body responded to this… man… in an unexpected way, seeing and feeling things his winter form could not. Hari leaned forward and sniffed the stranger, drinking in his musk. It smelled enticing. Strangely familiar.

He sensed the two-legs stiffen, and to reassure, him, Hari licked the man’s neck.

The two-legs was trembling now like a young whelp, so he tried something else. He took the stranger’s face in his hands and kissed him.

The shaking slowed, and then the man was kissing him back. Hari was hungry for him, like a starving wolf at the end of a long, hard winter.

It is not the time for this, the keh whispered in his ear.

He broke contact and turned away, ashamed that he was betraying his Clan, and for lust. An emotion of his summer form.

“I’m sorry,” he said to the two-legs, without looking back. “It won’t happen again.” Even he was not sure if he meant Neru’s attack, or the kiss.

He shifted back into his winter form and loped off into the woods after his pack mates.

Scott has been writing since elementary school, when he and won a University of Arizona writing contest in 4th grade for his first sci fi story (with illustrations!). He finished his first novel in his mid twenties, but after seeing it rejected by ten publishers, he gave up on writing for a while.

Over the ensuing years, he came back to it periodically, but it never stuck. Then one day, he was complaining to Mark, his husband, early last year about how he had been derailed yet again by the death of a family member, and Mark said to him “the only one stopping you from writing is you.”

Since then, Scott has gone back to writing in a big way, finishing more than a dozen short stories – some new, some that he had started years before – and seeing his first sale. He’s embarking on a new trilogy, and also runs the Queer Sci Fi  site, a support group for writers of gay sci fi, fantasy, and supernatural fiction.