Dusk Peterson’s The Shining Ones

I’m delighted to host Dusk Peterson here today to mark the release of the latest tale in the Eternal Dungeon series. The Shining Ones is a novelette (miniature novel) of disability and love, and can be read on its own or as a side story in The Eternal Dungeon, an award-winning speculative fiction series set in a nineteenth-century prison where the psychologists wield whips.

The Eternal Dungeon series is part of Turn-of-the-Century Toughs, a cycle of alternate history series (Dark Light, Waterman, Life Prison, Commando, Michael’s House, and The Eternal Dungeon) about disreputable men on the margins of society, and the men and women who care for them. Set between the 1880s and the 1910s, the novels and stories take place in an alternative version of America that was settled by inhabitants of the Old World in ancient times. One of the series in the cycle, Waterman, combines elements of the 1910s with retrofuturistic imagery from the 1960s.

“He was skilled by now at making innocuous remarks in the presence of the Shining Ones. Nobody had even guessed that he knew what they were.”

The Eternal Dungeon is filled with prisoners who shine like the sun.

No one knows this except Barrett Boyd, a guard notorious for having survived a disciplinary punishment that should have killed him. He is also notorious for his rebellion against the authorities of the royal prison. At a pivotal time in the Eternal Dungeon’s history, when abusive practices of the past may finally be abolished, Barrett finds himself drawn to the mystery of a younger guard, Clifford Crofford, who claims that he and Barrett are love-mates.

Barrett has no memory of this. He has no memory of anything before his punishment. What does the past matter, compared to Barrett’s determination to protect the prisoners? But Barrett cannot ignore his bond with Clifford, and the closer that Barrett comes to Clifford, the more the danger arises that Clifford will question Barrett’s sanity. . . . 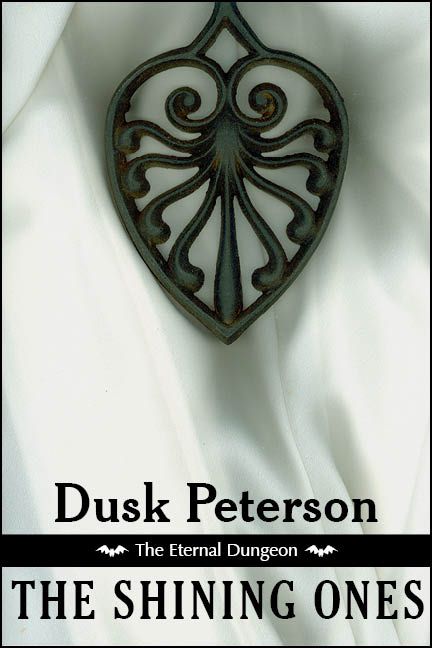 “I don’t want you to mistake why you’re here.”

Clifford quickly shook his head. “No, sir. I know you’re not inviting me into your bed. But we can be work partners, can’t we? To be able to work with you again – to help you fight to protect the prisoners against abuse . . .” He took a deep breath and said more steadily, “I want that more than anything else in my life.”

It would have been easier if he could have told Clifford the truth. If he could have said, “Everyone believes that my brain was changed, and it’s true. Ever since this dungeon’s High Seeker nearly beat me to death for shielding a prisoner against his cruelty, I’ve seen the prisoners here in a way that no one else sees them. I’ve seen the light that shines within them, as bright as a sun. I’ve seen how wondrous they are, and how fragile at the same time. I’ve dedicated my life to serving them in the only way I know how. . . . And I am dedicated to you as well. You are the only one, besides the prisoners, who shines with that deep, bold light. I am your servant, now and forever. I’ll give you anything that I can – anything that will please you. Anything but the love of a love-mate, for if I touched you for more than a few seconds, I would die of the exquisite pain.'”

He had always possessed enough sense not to say that to Clifford or anyone else. Always, from the first few weeks of his awakening.

Honored in the Rainbow Awards, Dusk Peterson writes historical speculative fiction: alternate history, historical fantasy, and retrofuture science fiction, including lgbtq novels, original slash, and other types of diverse fiction. Suspense plays an important role in many of the tales; the conflict in those tales is both external and internal. Peterson’s stories are often placed in dark settings, such as prisons or wartime locations. The mood of the stories, however, is not one of unrelieved gloominess; romance, friendship, family affection, and faithful service are recurring themes. Visit duskpeterson.com for e-books and free fiction.

Where to find Dusk:

Dusk is touring with Pride Promotions today, and can be found here: