Taking Shield 03: Makepeace is on its way!

I don’t have a publication date yet, but I *do* have a cover. And one that is just gorgeous – with thanks to Adrian Nicholas at Wilde City. 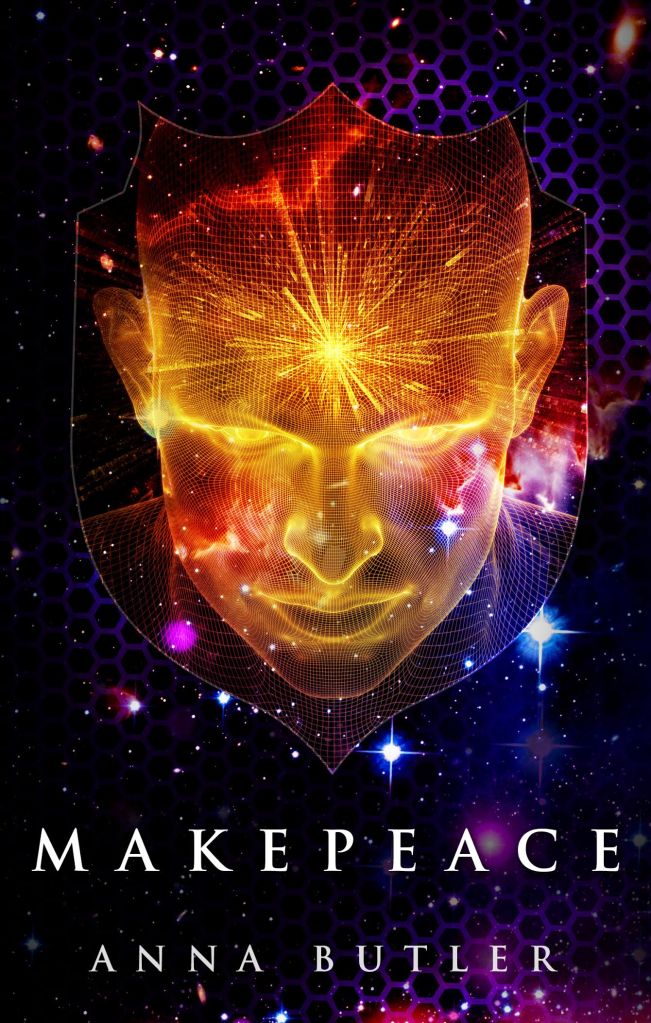 Returning to duty following his long recovery from the injuries he sustained during the events recounted in Heart Scarab, Shield Captain Bennet accepts a tour of duty in Fleet as flight captain on a dreadnought. The one saving grace is that it isn’t his father’s ship—bad enough that he can’t yet return to the Shield Regiment, at least he doesn’t have the added stress of commanding former lover, Fleet Lieutenant Flynn, and knowing the fraternisation regulations will keep them apart.

Working on the material he collected himself on T18 three years before, Bennet decodes enough Maess data to send him behind the lines to Makepeace, once a human colony but under Maess control for more than a century. The mission goes belly up, costing Albion one of her precious, irreplaceable dreadnoughts and bringing political upheaval, acrimony and the threat of public unrest in its wake. But for Bennet, the real nightmare is discovering what the Maess have in store for humanity. It’s not good. It’s not good at all.

The thing, whatever it was, had fallen between two pods. It didn’t move. Unlike the soldier outside, it didn’t kick its legs or drum its heels. It felt nothing. Bennet bent over it, laser at the ready, his shoulders lifting to hunch protectively over his neck. He blew out a soft breath. Thank fuck. Thank fuck.

Not an organic Maess, at least.

Definitely a drone. Possibly a modified EDA? It had the same well articulated hands, the same smooth plasticised skin over the electronics and metal underneath. But the metallic body had a bluish tinge.

The head was different. His first thought was it was translucent, the interior scattered with pinpoint lights. But no. The ovoid was bigger than usual but solid and opaque. Some sort of mesh covered the metal casing, the tiny lights woven into it at varying depths, giving the illusion he could see inside.

Blue lights, the intense sapphire blue of the lights fizzing down the columns into the pods. Whatever this was, it was no ordinary drone.

The lights in its head dimmed. Flickered out.

The thing was deactivated.

It had shaken Haydn out of his previous calm. “What the hell is that?”

T18. Bennet had seen something like this on T18. Just a glimpse. When he’d seen that Thing, the real Maess, surrounded by drones, there had been something else. Something thinner than the usual drones, less bulky. Blue lights were involved, too. The Strategy Unit analysts never had worked out what it was. In the end they’d concluded it had been a problem with his camera, reflecting the lighting inside the base on T18. He’d had no reason to argue.

Well, now he knew it hadn’t been the lighting.

Earth’s a dead planet, dark for thousands of years; lost for so long no one even knows where the solar system is. Her last known colony, Albion, has grown to be regional galactic power in its own right. But its drive to expand and found colonies of its own has threatened an alien race, the Maess, against whom Albion is now fighting a last-ditch battle for survival in a war that’s dragged on for generations.

Taking Shield charts the missions and adventures of Shield Captain Bennet, scion of a prominent military family. Against the demands of his family’s ‘triple goddess’ of Duty, Honour and Service, is set Bennet’s relationships with lovers and family. When the series opens, Bennet is at odds with his long term partner, Joss, who wants him out of the military and back in an academic, archaeological career. He’s estranged from his father, Caeden, who is the commander of Fleet’s First Flotilla. Events of the first book, in which he is sent to his father’s ship to carry out an infiltration mission behind Maess lines, improve his relationship with Caeden, but bring with them the catalyst that will destroy the one with Joss: one Fleet Lieutenant Flynn, who, over the course of the series, develops into Bennet’s main love interest.

Over the Taking Shield story arc, Bennet will see the extremes to which humanity’s enemies, and his own people, will go to win the war. Some days he isn’t able to tell friend from foe. Some days he doubts everything, including himself, as he strives to ensure Albion’s victory. And some days he isn’t sure, any longer, what victory looks like.