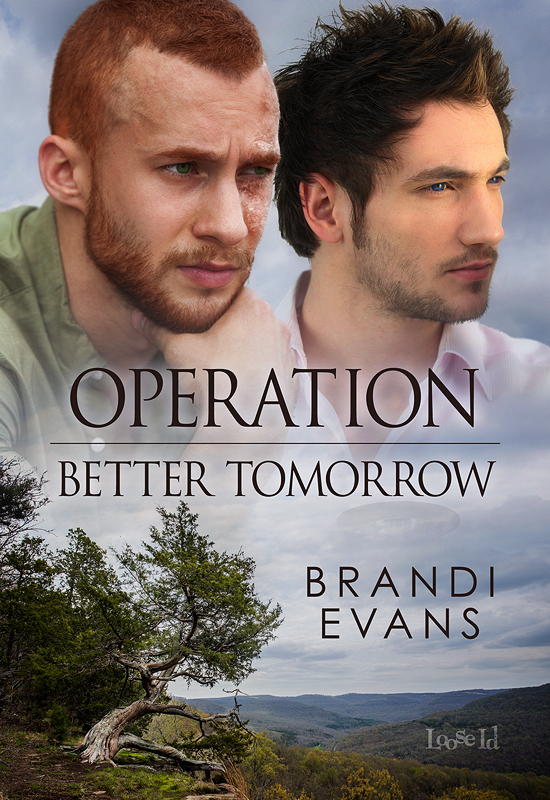 The interview of a lifetime.

When Aaron Strickland’s assigned to write a feature article on Caleb Douglas, the first openly gay soldier to receive the Medal of Honor, he’s over-the-moon. Meet a sexy, real-life hero? Yes, please. And in the weeks leading up to their interview, the former soldier becomes a recurring player in Aaron’s fantasies.

Years earlier, lost in the throes of depression and PTSD after an ambush left his body and soul scarred, Caleb was on the brink of giving up when a magazine article changed his life forever—an article written by Aaron. Emerging from the depths of his pain, Operation Better Tomorrow—part homestead, part halfway house for those down on their luck—was born.

Tragedy lurking on the horizon.

As the days pass, Caleb and Aaron’s tragic pasts bind them in ways they aren’t prepared for, but it also leaves them vulnerable. Pushing forward means breaking down walls they’ve built to protect themselves, and just as they’re poised on the precipice of happiness, a darkness descends on the homestead, a hatred that will leave one man clinging to life and the other willing to risk everything to save him.

Aaron’s dick tightened, and he took a step toward Caleb. “I’ve learned a lot about homestead operations today, but I want to know more about you. Tell me, Sergeant Douglas, what inspired you to begin Operation Better Tomorrow?”

Caleb scrubbed a palm over the back of his neck. “That’s kinda embarrassing, actually.”

“I don’t believe that. How can the origin story of a place like this be embarrassing?”

“Because of you, Aaron.”

Caleb looked down, hands fisted low on his hips in a masculine mirroring of Aubrey. “Things got really low for me about six, seven years ago. The physical therapy was torture, and I was in pain all the time. The PTSD and depression didn’t help matters either. I was sick and fucking tired of it all.”

Was that code for wanting to commit suicide? Aaron wanted to ask, but he held back, letting Caleb finish.

“Then, one day, I was sitting on the couch, a bottle of pain pills in one hand and a bottle of Jack Daniels in the other, when a magazine on the coffee table caught my attention. To this day I don’t know how it got there, but a title on the cover caught my attention. So I started reading. Everything the woman in the article was going through, her physical and emotional pain… Change a few things, and it could have been written about me. And by the time I finished, I was in tears.” The left side of his mouth tipped up in a haunting smile. “Although, I’d appreciate it if you’d leave the crying part out of the article. I do have a reputation to maintain.”

“Totally off the record.” Aaron held up his three middle fingers and stepped closer. “Scout’s honor.”

Caleb nodded. “It’s hard to put into words, but the article struck a chord deep inside me. It was one of those life-changing moments where everything becomes clear. The past, the present, the future. And I saw this place in my head. Operation Better Tomorrow, a way to turn my pain into someone else’s better tomorrow.”

“Wow. That’s just… Wow.” Something about the words Caleb used were familiar, but Aaron couldn’t quite place them. “As a writer, that would be the greatest compliment a person could give me, to tell me my words were the bridge they needed to get from a painful past and into a brighter future. I think I would literally fall over from pride.”

Caleb closed what little distance remained between them. “Is that your subtle way of telling me I should be prepared to catch you?”

“Be prepared to catch me?” The question escaped seconds before realization bitchslapped him. Oh, Sweet Baby J. He’d written the article that had saved Caleb’s life.

Brandi Evans was raised by a caravan of traveling Gypsies. She spent her days learning the ways of her people and her nights lost in legends as old as time. Okay, not really, but that’s way more interesting than the truth!

In reality, Brandi grew up the oldest child of an ordinary family. Grade school, middle school, high school. Nothing extraordinary happened until she left the nest. She joined the military, went to college, got married, and became a mom. And somewhere along the way, she discovered she liked to read—and write!—stories hot enough to melt eReaders.

These days, she calls The Natural State home where she lives with her hubby, two beautiful daughters, two dogs and a cat who has yet to realize she doesn’t own the place. Soldier. Wife. Mom. Multi-published smut writer. Brandi’s life might not be “traveling Gypsy” interesting, but she’s had fun. And in the end, isn’t that all that really matters?