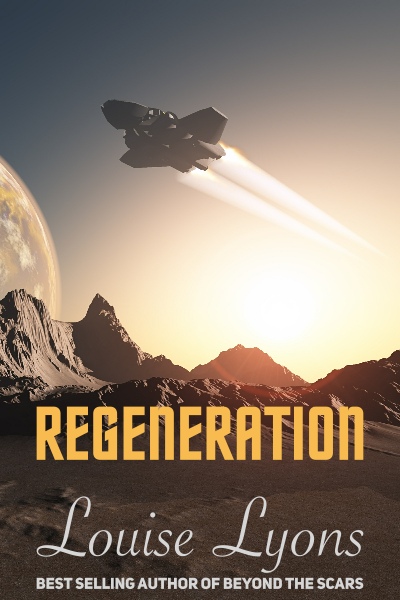 I’m so pleased to welcome Louise Lyons back to the blog today, to talk about where she gets her ideas for her books, and to celebrate the release of her new book, Regeneration. Over to Louise:

Where I get my inspiration

This varies a lot. Starting with Regeneration, the idea sprang from a kind of Lara Croft image. Not Lara herself, but an action character like that. I imagined the character stranded on an inhospitable planet, fighting off the indigenous species, and eventually, after the arrival of another ship, fighting off the attentions of one character (Neil Ross), and welcoming that of another (Christian Novak). Gradually the idea grew in my mind like a movie rolling out, until I had a number of scenes that I realised would make for a great story. Eighty percent of the story developed during NaNoWriMo 2014, and I finished it over the next month. It’s taken this long to get it published, thanks to some major rewrites to improve my world-building in particular.

Some of my books have been inspired by things I’ve already experienced. I absolutely loved the 1990s. It was “my era” when I was in my 20s. I’d just escaped an unpleasant relationship, and I wanted to have FUN. I love rock music and I spent a lot of time visiting a night club called Rock City in Nottingham, UK. If you live in the UK and like rock/glam/metal music, you’re sure to have heard of it. It’s been open since the 80s and is a pretty large double-level club. All the upcoming bands of that time used to aim to play there. So I set the story of Beautiful Thunder in Nottingham with my characters frequent visitors of the club. Alex and Lindsey, the MCs, are based on the images of people I saw there in the 90s—beautiful, long-haired, leather and spandex-wearing, makeup-covered androgynous sexy men.

Beyond the Scars (a novel) and Lost and Found (a short story in the anthology Age is Just a Number), were both inspired by personal experience of escaping an abusive relationship and the events afterwards, and losing a much-loved pet respectively.

Cervena, my summer 2016 novel with Dreamspinner Press, was a little different. The idea came to me randomly, with the idea for a nightclub owner falling for a dancer. Then I decided I would set it in Prague, a city I’ve visited and explored. It started out with the idea of a love story with a bit of an age gap between the two characters, and the scenario of employer and employee. But when I started writing, the characters got the bit between their teeth and it became more of a thriller, including gambling, murder, kidnap, and the help of a dubious “mob” character. I have no idea where that came from, because it didn’t start out that way! 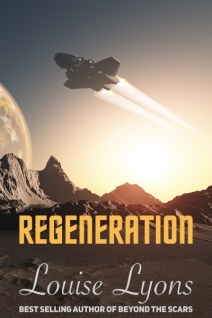 In the 23rd Century in the galaxy of Sigma Kappa, Kim Fortune was the first surviving experimental enhanced human—a regenerate. Aged 15, he escaped the lab and years later, his failings as a regenerate and the suspicion of regular humans, leave him lonely and lacking in self-worth. Stranded on an abandoned planet, the arrival of a stricken ship and its crew give him hope that he may finally find what he always longed for—love.

Christian Novak is a successful regenerate with all the intended attributes—including lack of human emotion. Despite their immediate attraction to each other, Kim’s failing confidence, and Christian’s inability to empathize are a recipe for disaster. But war, imprisonment, and danger throw them together, and after each saves the other’s life, their feelings begin to change.

Can a seemingly unsuitable pair ever find love, or is a future together destined to fail?

Click here to win a copy of any book on Louise’s backlist.

Louise Lyons comes from a family of writers. Her mother has a number of poems published in poetry anthologies, her aunt wrote poems for the church, and her grandmother sparked her inspiration with tales of fantasy.

Louise first ventured into writing short stories at the grand old age of eight, mostly about little girls and ponies. She branched into romance in her teens, and MM romance a few years later, but none of her work saw the light of day until she discovered FanFiction in her late twenties. Posting stories based on some of her favourite movies, provoked a surprisingly positive response from readers. This gave Louise the confidence to submit some of her work to publishers, and made her take her writing “hobby” more seriously.

Louise lives in the UK, about an hour north of London, with a mad dog called Casper, and a collection of tropical fish and tarantulas. She works in the insurance industry by day, and spends every spare minute writing. She is a keen horse-rider, and loves to run long-distance. Some of her best writing inspiration comes to her, when her feet are pounding the open road. She often races home afterward, and grabs pen and paper to make notes.

Louise has always been a bit of a tomboy, and one of her other great loves is cars and motorcycles. Her car and bike are her pride and job, and she loves to exhibit the car at shows, and take off for long days out on the bike, with no one for company but herself.