Joe’s back with exciting news about an audio version of one of his much-loved Cozzi Cover books. Actually, I think this was the first book of Joe’s to feature here at Love That’s Out Of This World, so it’s especially nice to revisit it in its new incarnation!  Here’s Joe on creating an audio version:

The making of an audiobook

Listening to an audiobook is an intensely personal experience. The listener enters the world created by the author and performer, and lives in the world of the book. As an author, I’ve been incredibly lucky to have worked with only the finest audiobook performers. If you haven’t yet, don’t miss my The Naked Prince and Other Tales from Fairyland (Joel Leslie, Dreamspinner Press), A Home for the Holidays/Bobby and Paolo’s Holiday Stories Book 1 (Joel Leslie, Dreamspinner Press), Drama Queen/the first Nicky and Noah mystery (Michael Gilboe, Lethe Press), Drama Muscle/the second Nicky and Noah mystery (Chip Hurley), Drama Cruise/the third Nicky and Noah mystery (Brad Enright), Paper Doll/the first Jana Lane mystery (Charissa Clark Howe), and Porcelain Doll/the second Jana Lane mystery (Derick Snow, The Wild Rose Press).

When Rae from NineStar Press asked if I’d like to have an audiobook of Cozzi Cove: Bouncing Back (TBR Pile Book of the Month and Rainbow Award Honorable Mention), I did the happy dance. Cozzi Cove is a gay resort of my imagination, located on a gorgeous private cove on the New Jersey Shore with a stunning view of the bay, ocean, and lighthouse in the distance. The locations are vivid in my mind. As in most serials, the characters and their lives are a part of me. The humor, romance, and plot twists and turns still captivate and enthrall me.

There is Cal Cozzi, an ex-professional football player, who manages his family’s gay resort in the town named after his great-grandfather who founded it. Cal lives with the love of his life, his husband Lance. Connor, the college student assisting Cal at the resort, is packed with muscles and hormones. He revels in Cozzi Cove, and in checking out each resident for a possible fling on the cove—which he often enjoys. Tommy, the bald, muscular, tattooed resident of Cozzi Cove who owns the local bar has held a torch for Cal since high school. Carla Mangione who runs Carla’s Seafood Restaurant holds a similar torch for Cal’s sister, Taylor, who drops in from Rome, Paris, Wall Street, or Palm Springs. The vacationers in book one include sexy college students, a famous gay novelist, a gay porn star, gay dads, and a computer game designer who sees a merman on the cove. Everyone has a secret at Cozzi Cove, nothing is what it seems at first, and romance is always in the sea air.

Audio book performer Chase Johnson is the perfect narrator for the novel. Chase has an incredibly sexy, masculine voice, perfect for Cal Cozzi. He perfectly embodies Cal’s strength, honesty, and determination. Chase is also quite versatile and realistically portrays the other twenty character-voices in the book. He connects with each of them in terms of their personalities, passions, and secrets. His diction is flawless, and his audiobooks are produced with fine equipment. When he reads the descriptions of Cozzi Cove, I feel as if I am lying on a gorgeous cove at the beach. Chase also portrays the many humorous sections of the novel perfectly, keying into the timing and wit. His timing is also spot on for the many reveals in the novel. I was lucky to have found his audio clips online, resulting in asking him to narrate. After providing him with my insights into the characters and their relationships, Chase took it from there, submitting the audiobook ahead of schedule. I hope we have more collaborations in the future.

So, grab your Speedos, suntan lotion, and shades and head over to Cozzi Cove for a listen of a lifetime. I hope to see you there! And I love hearing from readers. Please let me know all about your trip to the beach at: http://www.JoeCosentino.weebly.com.

On Cozzi Cove at the New Jersey shore, handsome Cal Cozzi’s seven bungalows are open for summer and love. Mario and Harold are brothers and college students who happen to look alike, but couldn’t be more different: Mario is searching for love, and Harold is searching for lust. Josh and Greg, a wealthy older couple, are matchmakers for their son, Christopher. When it comes to Connor, the maid, packed with muscles and a roving sponge, anything can happen. Opposites attract as wild Tim with the secret past meets shy Mark, and porn star Chuck Caliber connects with Sean, a virgin romance novelist. And what will happen when computer-game designer Arthur has a midnight sea rendezvous with a merman? Even married Cal faces an emotional upheaval when a gay bashing turns into something quite unexpected. What secrets and passions lie in magical Cozzi Cove?

“I loved this story. It carries you through the full range of emotions, from joy to sadness, from happiness to anger.  The characters are beautifully written….I look forward to a return visit to the Cove.” TBR Pile

“Heartbreaking and heartwarming, sweet beginnings for some, sour endings for others, emotions jumping off the page as you turn eagerly to read more, welcome to Cozzi Cove. The author measured his scales to perfection in delivering the perfect balance of love, laughter and tears in this sexy, fun filled holiday romance entwined with some sadness. Summer magic waved its wand at all who visited and stayed at Cozzi Cove and I was one of those who wanted to stay.” Three Books Over the Rainbow

“poignant and full of beautiful imagery. It’s one crazy mix of characters, all weird and wonderful in their own way…It made me laugh out loud, cry and want to snuggle up with someone I loved. I couldn’t have asked for more.” Divine Magazine

“In true Joe Cosentino style, this book is packed full of drama! This cast of characters will have you laughing out loud one minute before ripping your heart out the next.” Joyfully Jay

“Joe Cosentino has the amazing ability to combine heartwarming, feel good moments with droll, sometimes biting humor, along with insights into the frailties and peccadillos of being human.” “Cozzi Cove: Bouncing Back is the very finest in literary fiction with a romance theme, yet it’s more than just that—it’s about human connections and empathy and finding a way out of the fear and inertia faced by so many. It’s also about courage and strength, about respect and coming to terms with all that life has to offer, and it’s about letting go. I loved this book and look forward to the next in the series. This is a highly recommended read, well-deserving of Five Stars.” GGR Reviews

“Cosentino tells the stories of the guests and owners at Cozzi Cove as separate yet intertwining stories, a delivery style that’s genius. It’s a bit like watching segments unfold in soap opera fashion…While the story is rife with the humor and lighthearted romance I’ve come to associate with Joe Cosentino, it also addresses several serious topics associated with the gay community: homophobia, stereotyping and coming out.” 3 Chicks After Dark

“This book is extremely well written and all the stories are equally compelling and cleverly crafted. There are moments when, just as you think you know what’s going on, the truth emerges and turns out to be something quite different….Cal’s guests are an amusing and heart wrenching mixed bag of people, all of whom I found irresistible in their own way….So many wonderful, poignant and often funny stories are told here….It’s a real roller coaster of a ride that’s finished off perfectly as the guests spend their last day at Cozzi Cove then check out to move on with their lives.” OptimuMM Book Reviews

“Another brilliantly written book by this author. He makes you want to take your own vacation in Cozzi Cove. You could feel all the emotion and love flowing from the pages.” Books Laid Bare Boys 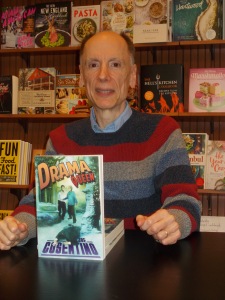