Release Blast: Matt Doyle’s The Fox, The Dog And The King

Matt Doyle’s here today, with news on the release of  The Fox, The Dog And The King, which was published last month. Welcome, Matt, and good luck with the new book. 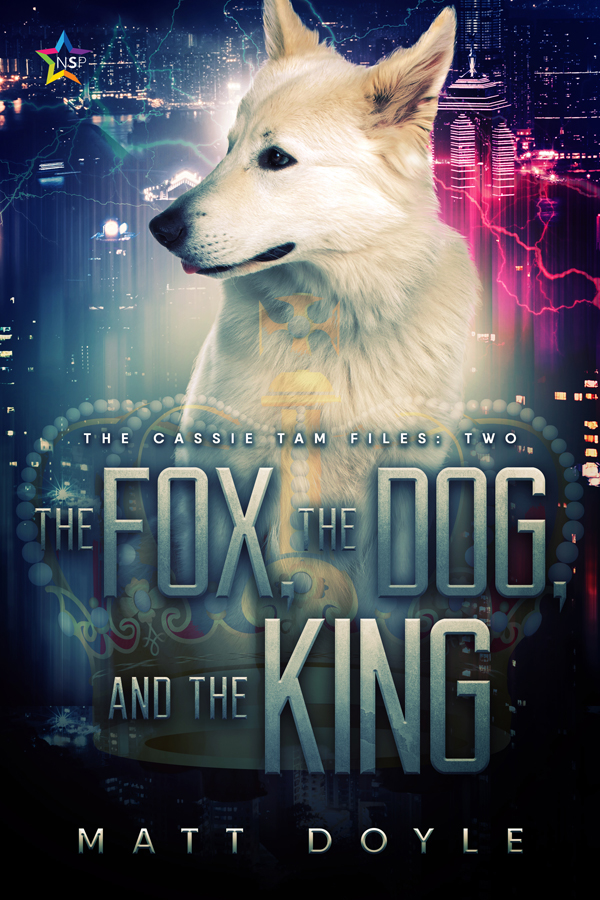 New Hopeland City may have been built to be the centerpiece of the technological age, but some remnants of the old world still linger. The tools of the trade have changed, but the corruption remains the same, even in the criminal underworld …

When PI Cassie Tam and her girlfriend Lori try to make up for their recent busy schedules with a night out at the theatre to watch the Tech Shift performer Kitsune, the last thing they expected was for Cassie to get a job offer. But some people are never off the clock, and by the end of the evening, Cassie has been drawn into a mundane but highly paid missing pet case. Unfortunately, in New Hopeland City, even something as simple as a little lost dog can lead you down some dark paths.

Until now, Cassie wasn’t aware that there even was a rabbit hole, let alone how far down it goes.

Warnings: The book does contain some violence, though this is not extreme. It mentions a dog fight being set up (spoiler: it gets stopped before it can start). Cassie also swears a bit, though entirely in Cantonese.

Series Title: The Cassie Tam Files
Position (Number) in Series: 2
Necessary to Read Previous Books: No, But It Doesn’t Hurt

New Hopeland City was built to be the center of the technological age. It was supposed to be a shining example of humanity’s achievements. A beacon to guide us towards a better future. But some habits die hard. Within five years, it had become a hotbed of crime and corruption. And now, even the police are sometimes in too deep to help. That’s where I come in …

My name is Cassie Tam. I’m a PI. And this is my story.

“I’m sorry, but did you want to get changed before we speak? We’d be happy to leave the room while you get ready. It must be hard work performing in both the TS gear and a kimono thick enough to house projectors without them moving out of line with each other, even if they are the smaller, lightweight models.”

“You don’t know the half of it,” Kitsune sighs. “There’s a wireless motion detection system in each hand too,” they add, waving two metallic, clawed paws. “You’ll note that my tails are missing. They don’t yet make multi-tailed suits, you see, and the number is important within the folklore, so we had to find other solutions. The projector tucked under the obi sash keeps the back open nicely, and it allows movement, both in animation and in the actual device, but it’s a bit stronger than the main ones.”

“Meaning that it’s heavier,” I reply.

“Indeed. The way the system works is identical to the tail guidance in regular suits though.”

I frown and Lori clarifies, “Regular Tech Shift gear uses two small wireless touchpads to control tails, one for the bottom half, and one for the top half. They’re embedded in the hand rest of Ink’s front legs. For hybrid-style gear, they usually sit inside the thumb of each hand. It’s the same concept in each one, but animal-style gear allows for bigger movements, while hybrid gear measures micro movements.”

“Which would be rather fiddly, given the level of movement that I require. These are built into the paw pads and are set to register larger movements so that the tails can move in time with the different dance routines and my more flamboyant gestures,” Kitsune explains, demonstrating one of the hand flourishes from the show. They pause then and chuckle. “Ah, but I’m rambling. I am afraid that changing is, contractually speaking, impossible. Will my appearance be a problem?”

Lori laughs and cuts in with, “You are so not used to us yet.”

I laugh quietly, despite myself. The miserable old loner that still lives in my head says I should be angry about that; I’m working after all. But the part of me that was enjoying the evening is far more prominent and reminds me that this was supposed to be Lori’s evening too. I can allow her a small jab or two on that basis. “My early experiences with Tech Shifters were not positive,” I say, addressing Kitsune. “I’m getting better, though. What do you mean by ‘contractually speaking,’ if you don’t mind me asking?”

“Not at all. It is essentially as it sounds. The Kitsune brand is a joint venture between myself and Kevin, and there is a lot of paperwork involved dealing with how the whole thing is to be played out in every mundane situation that you could imagine. What it means is that I can boss Kevin about and make him my dogsbody as much as is required, but at the same time, I must respect his rather brilliant marketing strategies. Part of that means that the mystery of the Kitsune’s true identity is to be protected at all times. As such, I do not meet with anyone without my professional face on. It seems a little strange, I know, but he was previously a historian of certain old-world sporting brands by trade and thought that applying a degree of what he called kayfabe would help give the whole thing a new edge. I can’t say that he was wrong.”

“So, are you Kitsune when you’re around family too?” Lori asks. “Or partners?”

“Oh, I have no time for partners, not with my touring schedule. With family, I can be myself, though Kevin did insist upon them signing a gagging order to prevent them from revealing my identity to anyone who hadn’t signed a similar contract. You should have seen my mother’s face when he brought that up. I honestly thought that the rolling pin she was holding was going to be put to nefarious use. Outside Kevin, even my oldest friends do not know who resides beneath the mask.”

“That must be hard to maintain,” I say.

“Oh yes, I have cover stories and everything. It’s somewhat akin to witness protection if television is to be believed. As far as most know, I am simply a touring stagehand for the great performing fox spirit.”

I nod. “Kitsune, as pleasant as this is, I assume there was a reason that you wanted to see me?”

“Oh yes, of course. I saw the news coverage of your recent success with that Gary Locke character,” they say, and Lori flinches slightly. “As far as local detectives go, there are plenty of them about, but you are certainly the most well regarded. I have actually been in town for a week now, and I am due to remain here for a further two. I am afraid that, over that initial period, I was subject to a crime of the nature I am led to believe the police do not take overly seriously.”

“The police wouldn’t be happy about not knowing your identity, regardless of the crime. If it’s one that they won’t usually touch, that doesn’t leave many possibilities. What are we talking about?”

“It is rather lonely on the road,” they sigh wistfully. “A few months ago, we stopped in Toledo, and I was awoken from a post-performance nap by a clattering outside the tour bus. I wandered out, expecting to find a fan or two hunting autographs, and instead found this charming little thing skulking around the bins. I named him Fish.”

Kitsune produces a phone from their kimono, loads up a photo, and passes it over. It shows a snow white American Shepherd dog sitting on one of the tour bus seats and giving the camera a suspicious look. It’s too big to be a puppy, but certainly not big enough to be fully grown.

“You named your dog Fish?”

“It seems strange, doesn’t it?” Kitsune laughs. “There’s a reason, though.” They take the phone back and enlarge the picture, revealing that the dog’s tail is about half the length it should be. It was easy to miss at normal size because the single colouring made it seem like it was tucked under its legs. “When I was young, my parents had some rosetail betta fish. One of them was pure white, and it had a habit of nibbling through its tail fin. When we took Fish to the vet, they said that the tail damage, judging by the angle of the marks, was likely self-inflicted. I couldn’t remember what my parents called the fish, so I just stuck with Fish.”

I nod. “And I assume that Fish is now missing?”

“I am afraid so. It happened yesterday, during the early hours. I was woken by a loud bang and found that Fish was gone, and the tour bus door was open.”

“Could Fish have run away?”

“It would have been difficult for him to open the door, but not impossible. I don’t think that he would have run, though. We were lifelines for each other, you see. He kept me company during the day, and when he had nightmares, I comforted him. If he was spooked, he would usually run and hide near my bed. I heard something else too, a van door being slammed shut maybe? And then an engine.”

“So you’re thinking that he was stolen.”

“Honestly? I don’t know. Do you think that you could take the case? How much would it cost?”

Matt Doyle lives in the South East of England, sharing a house with a wide variety of people and animals including a dog, a cat, a snake, a rabbit, and an ever changing selection of teas. Matt is pansexual and gender-fluid, and is happy for people to use whichever pronouns they wish.

Over the years, Matt has spent a considerable amount of time chasing dreams, gaining varying degrees of success in a great number of fields. This has included spending ten years as a professional wrestler (both working shows under the ring name Tad, and working backstage booking and running several successful shows in his local area), game creation, and completing a range of cosplay projects.