That title has a pleasing sort of symmetry to it, don’t you think?  Anyhow, on to business.

Don’t know about you, but my Facebook feed has a lot of naked men on it. Can’t imagine how that happens.  Every now and again, as you’re spooling through, smiling at all the saucy bookcovers and trying to tell yourself that they don’t all really look alike – and hey! it’s that blond model again and does that boy even *own* a shirt? – a cover leaps out at you, virtually yelling “Look at me! Looky here! I’m different!”

The cover of Theo Fenraven’s new release (re-release?) did just that. I just love how different it is, love the explosion of hot colour against the grey background. It *pops*. And when I heard the tale of getting the book rights back and reworking the text, I couldn’t wait to offer Fen a slot here to tell us all about it. So here’s where I bow out, and Fen takes over: 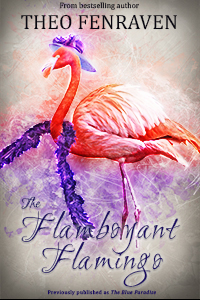 I started getting books published when I owned a house in Western Wisconsin. That was quite a while go. The economy sucked then, too; Bush was still president and Scott Walker was waiting in the wings, but that’s a tangent I won’t go off on. Heh.

A few months ago, I suddenly realized the contracts on a couple books I’d placed with a publisher had surely run out, so I emailed and asked for my rights back. They had no problem with that, but I was informed I couldn’t avail myself of any of their edits. In other words, I was on my own.

As it happens, I’ve been a professional editor for years and years, so I was not daunted. I opened the original document, got out the figurative red pencil, and began at the beginning. It had been years since I’d read these books. The words were fresh and new, making the first edit easy. But then it immediately became more difficult.

Ever wonder why a publisher puts authors through multiple edits? Because no matter how good an editor you are—and I’m pretty damn good—things are missed. We can also assume writers overlook shit, because we develop tunnel vision when we’re in the zone, and weird little details escape our notice.

That’s where beta readers come in. I would no sooner publish without them than I would walk out the front door naked. Once that book is available, you are essentially naked before the world, all your mistakes blinking in neon for everyone to see. Most of us know a few reviewers who delight in pouncing on every little error. “Typo on page sixteen and my gawd! Didn’t anyone confirm the spelling of that street name in the second to last chapter?” And your four-star review slips to three.

The reissues of those titles got different names, a thorough vetting, and new covers before being sent back into the world through my press, Voodoo Lily. In the case of The Flamboyant Flamingo, several scenes were added. In Phoniex, one character was changed from minor to major and male to female. Yes, it was a lot of work, but how many times does one get a second chance? I decided to take advantage of it.

If you get the rights back to previously published works and hand the titles off to a new publisher, you’re good to go! They’ll take care of everything for you.

But if you self-publish, as I do, prepare for a lot of work or an expenditure of money (to pay for those edits and the new covers). It will essentially be no different from what you do to prepare an entirely new book for release.

Is it worth it? Only you can answer that question, but one of the reasons I wanted my rights back is because the royalties I was getting on those publisher titles were so tiny, given their cut and that of the third-party vendors, I felt like I was giving the copies away.

Self-publishing allows me to take control of everything, and that pleases the thwarted dictator in me. I always wanted to run a small country. Self-publishing gives me the illusion I do, thereby saving the world from my grander ambitions.

Benched for a minor knee injury, pro baseball player Devin Carter recuperates on beautiful Islamorada in the Keys, where he meets Jim Dellwood, half-owner of a run-down resort. The attraction is immediate, the chemistry is good, but it’s not love yet. They agree to stay in touch but keep things casual.

Back in Sarasota, Devin hooks up with another player for no-strings sex but quickly realizes Jorge Rodriguez, newest teammate for the Suns, has a different take on their relationship. With things heating up between him and Jim, Devin tries to break it off, but Jorge won’t take no for an answer.

Set in Florida, the sun-drenched land of eternal summer, and played out against the backdrop of high-stakes baseball, this tale of love and obsession will keep you awake long into the night.

The team returned to Sarasota two days later. Devin couldn’t wait to see Rusty and sleep in his own bed. He also needed a break from Jorge, who had attached himself to Devin like a leech to bare skin, despite his best efforts to dislodge him.

It was disconcerting, to say the least. He wasn’t happy spending much of his day with someone he didn’t love but only liked, someone who was basically, to put it crudely, a fuck. Whatever the magical thing was that happened between two people who resonated with each other, he and Jorge didn’t have it.

Determined to end it once and for all, he shed Jorge as quickly as possible upon arrival and hurried home, stopping at Elise’s to pick up Rusty. The dog was exuberant in his welcome, leaping about and smiling like mad.

Once back at the condo, Devin breathed a sigh of relief while Rusty seemed to do the same, happily sniffing in the corners before settling in his favorite spot on the balcony. Cell in hand, Devin joined him, sitting in his comfortable lounger, feet up, head back, gazing at a beautiful blue sky.

“At last, and it feels great.” It was odd. Much as he’d come to resent Jorge’s presence, he liked the idea of Jim being around. “I don’t suppose you could get away for a couple days?”

“That might be possible. Our busy season doesn’t start for a while.”

“That would be great.” The thought of seeing Jim again caused a surge of happiness to go through him.

“How’s it going with your situation?”

Devin knew exactly what Jim was asking. “Unresolved. It was impossible to avoid him while we traveled, but I’m home now. I can control things better.”

“But you’ll see him at work. You can’t avoid him there.”

His cell signaled an incoming call. He checked the display. Shit. “Jim, I have to take this. I’ll call you right back.”

“No problem.” Jim clicked off.

Heaving a sigh, Devin said, “Jorge. I thought I was clear when we got back home. What we had was good, but it’s over.”

Hearing Karen Carpenter surreally singing the phrase in the back of his mind, Devin said, “I’m not comfortable being involved with someone I work with.”

“I’ve been careful. No one knows.” There was a touch of anger in his words.

Devin relented, softening his tone. “For that, I thank you.”

The hardness sprang back into his voice. “No. I meant it, Jorge. We’re done.”

There was a long moment of silence, and Devin waited, hoping Jorge would accept this and let it go. Finding out Jorge had called Jim behind his back and then lied about leaving his phone in his room had been the beginning of the end. No amount of sex would change the feeling of weird now surrounding the third baseman.

When Jorge finally spoke, it was in a whisper. “I think not.”