The Rumble of “Beautiful Thunder”

I’m delighted to welcome fellow Brit Louise Lyons back to the blog today, to talk about her latest release, Beautiful Thunder. And am I striking lucky this month with beautiful book covers to show off? What do you think of this one? Anyhow, over to Louise:

Can romance and rock ‘n’ roll dreams survive with a storm raging around them?

Alex Randall has always wanted to be a rock singer. When he answers an ad from a local band, his dream finally comes true. He loves the stage, and the group’s fans love him. Things couldn’t be better, except for the attraction he develops for the band’s guitarist, Lindsey. Alex is surprised and initially worried, since he only had one brief flirtation with a boy in his teens. But even though he and Lindsey become close and start seeing each other, Alex fears commitment, and Lindsey worries that Alex might only be experimenting.

When Lindsey’s ex contacts him following a health scare, fear and anger drives a wedge between Alex and Lindsey, which causes rifts within the band. Alex and Lindsey’s relationship is still new and fragile, and with Alex unwittingly blaming Lindsey for their problems, it becomes a true challenge for them to weather the storm. 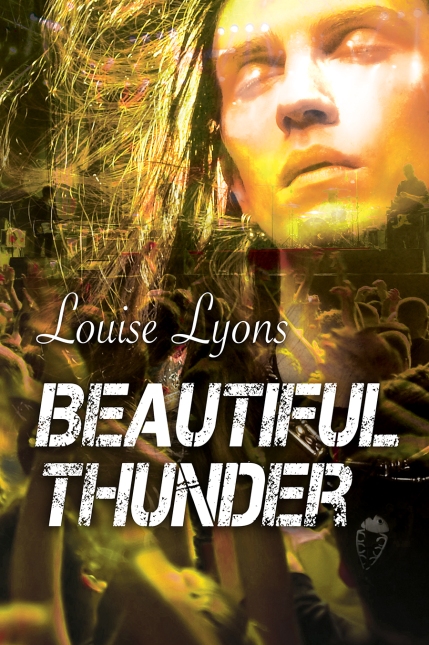 “I, um, I came in by mistake.” I hoped the lack of light in the club would disguise my red face. My cheeks felt as if they were on fire. Avoiding his eyes, I let my gaze drift down over his white ruffled shirt—the same one he’d had on that time in Rock City.

“Right. First you can’t make band practice because you’ve caught my fictitious flu, and now you’re in a gay club by accident?”

I groaned. “Yeah, I lied about being sick. I’m an idiot. I came in here because I saw you down the street and I didn’t want you to see me and realize I lied.”

Lindsey frowned. “Why lie? Why not just say you can’t make it? Presumably you were going out to pick up a girl.”

“I’m sorry.” I couldn’t tell him the truth—that I hadn’t wanted to face him—and the only other option was to let him think I’d let the band down in favor of getting my rocks off. “It won’t happen again. What are you doing in here, anyway?”

“I come in here every couple of weeks. I was intending to catch up with some friends.”

“So you skipped practice too?” I raised an eyebrow.

“I didn’t skip. Mark rang me and said you were ill and asked if I wanted to practice anyway. We decided to leave it and have a longer session tomorrow instead, with or without you.”

“Sorry,” I repeated. I took a long gulp of my beer. “I told Mark I’d caught your flu. Stupid, I know. I wasn’t thinking. I’ll get out of here in a minute. I don’t want to cramp your style.”

“I’m not looking for a bit of fun, Alex,” Lindsey snapped. “We don’t all get off with some random stranger every other night.”

“But you don’t date. I doubt you can even remember the name of the last girl you were with.”

He was right, I couldn’t remember, and I covered it up by trying to sound annoyed. “Why are you having a go at me? Because you think I’m a slut? Or because I lied about being ill?”

I stayed where I was as Lindsey went to the bar and engaged in a chat with someone while he waited to be served. He shook hands with the other man and then leaned on the bar and talked to the barman. Eventually, he returned to me, carrying a bottle of Bud.

“I’ve nearly finished this.” I indicated my own bottle. “Then I’ll go.”

Lindsey nodded and sipped his beer. He didn’t speak, and I fiddled with my bottle, trying not to stare at him. He looked good as usual, and for once he wasn’t wearing makeup. His jeans were so tight, he probably had to use a shoehorn to get into them. I couldn’t stop myself imagining us in various scenarios—dancing like the two guys a few yards away, kissing like the pair nearby who were still at it. Would Lindsey even be interested in me?

I didn’t know how long we stood there not talking. Lindsey interrupted my thoughts with a muttered curse, and I looked up. “What’s wrong?”

“The dark-haired bloke who just came in. The one in the red shirt.”

I looked toward the door and spotted the man Lindsey had described. His collar-length hair framed a rugged face, and his muscular body indicated he worked out regularly. I had no idea what Lindsey’s type was, but I hadn’t imagined him going for someone like that. The man looked like he had a lot of power to put behind a punch. I put my bottle down on a nearby table and clenched my fists. “Do you want to leave?”

“No, I’m going to speak to him. I’m sick to death of jumping out of my skin whenever someone rings me or knocks on the door.”

Lindsey shook his head. “Don’t interfere, Alex. Stay here.” He put his drink on the table and strode away from me. I watched, grinding my teeth, as he halted close to Steve and spoke to him. Sweat stuck my shirt to my back. I knew nothing about Steve other than that he’d hurt Lindsey, and I wanted to go over there and punch the man’s lights out.

The pair talked for a few minutes, Steve gesturing in what looked to be an effort to placate Lindsey. At least he didn’t look as if he was about to hit him. Lindsey kept shaking his head, and at one point he glanced over his shoulder in my direction and jabbed a thumb at me. I wished I could hear what they were saying. Steve shrugged and nodded. He stayed where he was as Lindsey came back to me.

“Do me a favor, I’ll explain later, just kiss me,” Lindsey said, his words almost running into each other in his haste.

I didn’t have time to think or question. I cupped his face, then slid my hand into his hair as I drew him closer. He rested his hands on my chest, and his lips parted as they met mine. I closed my eyes and caressed his lips, and I was instantly reminded of Joey’s kiss. Lindsey’s lips were firm but soft at the same time, and he wasn’t gentle and delicate like a girl. He kissed back hard and crushed my lips against my teeth. I wasn’t sure what he wanted from me, but it was obviously meant to be a show for Steve. I slid my arm around his waist and pulled him tighter against me. I didn’t care if he felt I was getting hard. My pulse raced, and I trembled with a combination of excitement and fear. Deepening the kiss, I stroked my tongue over his, and his tongue bar clicked against my teeth as he responded. I groaned and wondered if Lindsey heard it. He was bound to have felt the effect he was having on me by now. My rock-hard cock was trapped against his thigh.

Lindsey broke the kiss and turned his face into my neck. Warm puffs of breath fanned my skin, and he continued to hold on to me as he spoke quietly in my ear. “He wanted me back. He kept apologizing for hitting me. I told him to fuck off and that I’m with you. He seemed to accept it.” He pulled away at last and put a few inches between us. “Sorry about this. It was pretty childish, rubbing his nose in it, but….” He shrugged, then lifted his gaze to mine and grinned. “Anyway… I didn’t expect that reaction from you. Is there anything you want to tell me?”

My face heated up, and I lowered away. “I, um, you took me by surprise,” I muttered.

Louise Lyons comes from a family of writers. Her mother has a number of poems published in poetry anthologies, her aunt wrote poems for the church, and her grandmother sparked her inspiration with tales of fantasy. Louise first ventured into writing short stories at the grand old age of 8, mostly about little girls and ponies. She branched into romance in her teens, and MM romance a few years later, but none of her work saw the light of day until she discovered FanFiction in her late 20s.

Posting stories based on some of her favorite movies, provoked a surprisingly positive response from readers. This gave Louise the confidence to submit some of her work to publishers, and made her take her writing “hobby” more seriously.

Louise lives in the UK, about an hour north of London, with a mad Dobermann, and a collection of tropical fish and tarantulas. She works in the insurance industry by day, and spends every spare minute writing. She is a keen horse-rider, and loves to run long-distance. Some of her best writing inspiration comes to her, when her feet are pounding the open road. She often races into the house afterward, and grabs pen and paper to make notes.

Louise has always been a bit of a tomboy, and one of her other great loves is cars and motorcycles. Her car and bike are her pride and joy, and she loves to exhibit the car at shows, and take off for long days out on the bike, with no one for company but herself.