I’m over the moon to post about Mischief Corner’s new anthology. It’s not just any anthology, but one where each and every story is exactly 300 words long. It’s an exercise in precision and concision, a surprisingly daunting challenge to any writer. Believe me, it’s hard to write an entire story in such a small space. That so many writers have come together to show this skill makes for one amazing read.

In the first year of the Queer Sci Fi Flash Fiction contest, the judges received about 15 entries for the theme “Endings”. In the second year, it was 115 for “Discovery”. This year, they had more than 170 entries from people around the world, and from all parts of the LGBTIQA rainbow. “Flight” represents 110 of those people and their stories. 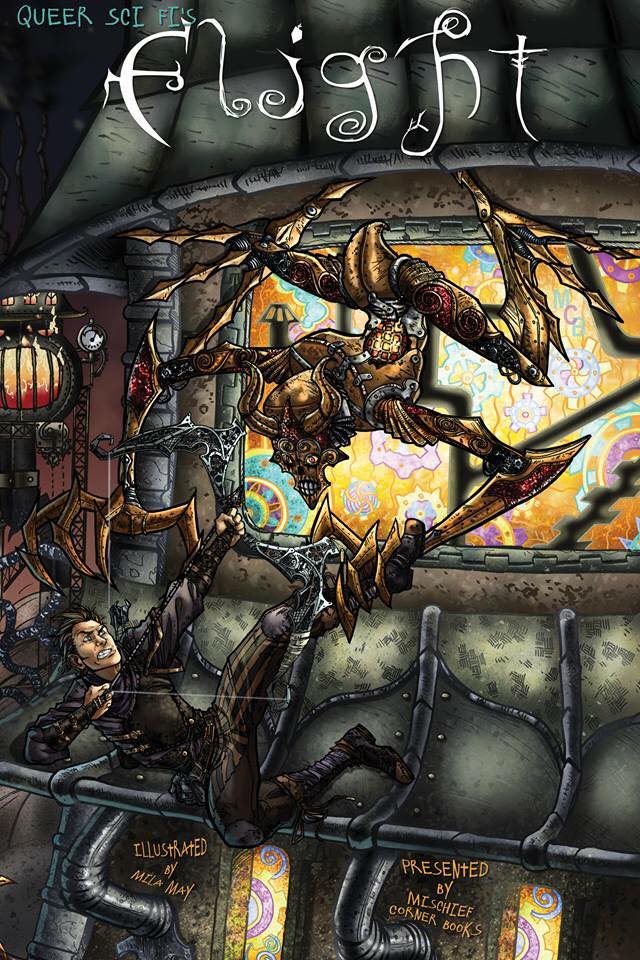 A 300-word story should be easy, right? Many of our entrants say it’s the hardest thing they’ve ever written.

Some astonishing stories were submitted—from horrific, bloodcurdling pieces to sweet, contemplative ones—and all LGBTQ speculative fiction. The stories in this anthology include AI’s and angels, winged lions and wayward aliens. Smart, snappy slice of life pieces written for entertainment or for social commentary. Join us for brief and often surprising trips into 110 speculative fiction authors’ minds.

J Scott Coatsworth, the leading light behind the Queer SciFi site, has dropped in to tell us about Four Ways to Annoy a Flash Fiction Judge

Thanks, Anna, for letting me stop by your blog to talk about Queer Sci Fi’s new flash fiction book, “Flight”. I thought I’d share something fun this time. Four things you can do as a flash fiction author to really annoy the QSF judges.

1) Write Something Off Theme: We create our QSF flash fiction theme every year with the word “possibility” in mind. We try to pick a one-word theme that lends itself to a bunch of different interpretations. In 2014, it was Endings. In 2015, Discovery. And in 2016 we tried “Flight”. The vast majority of entries fit the theme in one way or another – flight in the air, flight from something, spaceflight, even a flight of stairs. And yet, there were a small handful that, no matter how we tried, we could not match to the theme. Respect the theme.

2) Make Your Story Title the Same as the Anthology Title: There are literally millions of possibilities for your title. Don’t use “Flight” when submitting to an anthology called “Flight”. Be creative. Summon a brainstorming group. Pore over titles on Amazon for ideas. The best titles made us think, put a twist on the story, or stuck with us after the story was done.

3) Argue With the Judges Over Story Length: We use Word as our arbitrator for story length. We know some apps count words differently than others, so we settled on the one that is the standard in the writing and publishing word. If Word says your story is too long, it’s too long for this contest, no matter what your app says.

4) Submit a Scene and Call it a Story: Flash fiction stories should have a beginning, a middle and an end, and some kind of dramatic tension. We received some beautiful scenes, things that would make a great start to a fascinating short story, novella, or novel. But scenes are not stories. Make sure your story gives us a resolution.

If you want to see what great flash fiction looks like, check out our winners from the last three years here: https://queerscifi.com/flash-fiction-contest/

Hope you will submit something for the contest for 2017!

He rubbed his temples and squinted at the soft light of his surroundings through the fans of his thick eyelashes. The last drink had been a mistake.

Was that a shaker he’d felt, or the onset of a hangover?

He clutched a silken pillow and waited.

Suddenly, he felt his home tremble; a few pieces of glass and ceramic ware teetered and then fell to their demise.

Shit. This is the real thing.

With an effort, he hauled himself from his bed.

How many years had it been since the last one?

The shaking ceased, and he looked around his small dwelling. A model unit when he’d purchased it. Now filled with the result of years of collecting: a gramophone, a first generation television set, a water clock. And much more. All of it all had sentimental value—as did the photos of the various men that sat atop or alongside the items in his collection. Some of these men had loved him. All of them had once owned him. Now he owned their memories. That was the bargain.

Another shake. Followed by several unnerving tilts. He willed his cherished possessions to remain in place and willed himself into sobriety and a more becoming appearance as he prepared himself for work.

He selected a red brocade tunic and pants. A classic look always worked best for the initial consultation.

He peered up into the small shaftway at the center of the ceiling.

Then a small circle of light at the end of the shaft.

He sighed, folded his arms, and transformed into a cloud of red smoke.

Up and away to meet his new master.

And coming soon to : Apple, Barnes and Noble, and Smashwords