Here it is. Here’s the wonderful, amazing cover done by the lovely Reese Dante. Isn’t it just beautiful? Isn’t my Rafe just beautiful? Sighs happily and pats the pretty. 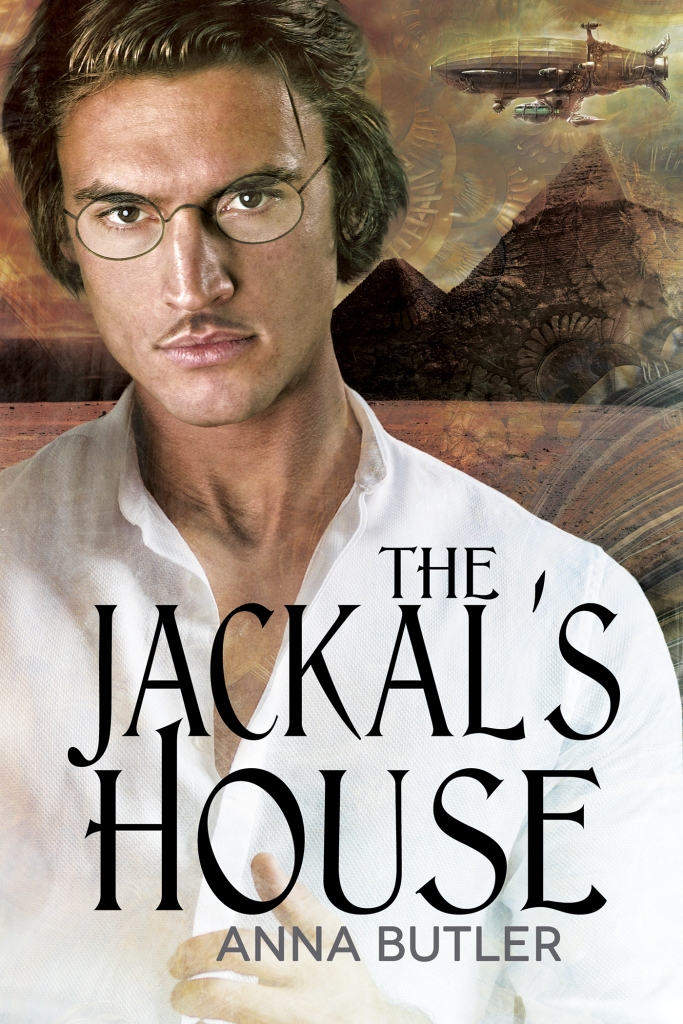 Something is stalking the Aegyptian night and endangering the archaeologists excavating the mysterious temple ruins in Abydos. But is it a vengeful ancient spirit or a very modern conspiracy…

Rafe Lancaster’s relationship with Gallowglass First Heir, Ned Winter, flourishes over the summer of 1900, and when Rafe’s House encourages him to join Ned’s next archaeological expedition, he sees a chance for it to deepen further. Since all the Houses of the Britannic Imperium, Rafe’s included, view assassination as a convenient solution to most problems, he packs his aether pistol—just in case.

Trouble finds them in Abydos. Rafe and Ned begin to wonder if they’re facing opposition to the Temple of Seti being disturbed. What begins as tricks and pranks escalates to attacks and death, while the figure of the Dog—the jackal-headed god Anubis, ruler of death—casts a long shadow over the desert sands. Destruction follows in his wake as he returns to reclaim his place in Abydos. Can Rafe and Ned stand against both the god and House plots when the life of Ned’s son is on the line?

Universal link to other digital stores (not DSP)

Want to win some loot?

Pre-order The Jackal’s House either at Dreamspinner or one of the other digitial stores (Amazon, Kobo, Nook, etc) when available, send a copy of the email confirmation (or a screengrab of it) to annabutlerfiction@gmail.com and

(ii) Your name will be entered in a draw for
1st prize—a signed paperback of the first Lancaster’s Luck book, the Gilded Scarab.

Winners will be announced on publication day.

Extra goodies:
(i) If you’re one of the first 15 people to respond, you’ll also get a little bag of Jackal loot, a cool Anubis temporary tattoo and a matching Anubis brooch;

Ned must have already arranged matters with the concierge, Charles. When we walked to the desk, Ned’s hand warm in mine, Charles had a key ready.

The room we’d used last November, the night we’d met. I glanced at Ned. Had he remembered? Was it a deliberate choice? He turned his head to smile at me. Oh, yes. It most definitely was.

We climbed the stairs hand in hand. A row of ornate, gilt-framed mirrors lined one wall of the upper hallway, pairs of girandole lamps mounted between each one. The lamps, set to a faint glow, left the hallway flickering with shadows. At every mirror, we loomed up in the looking glass, indistinct figures walking close together and flaring into muted life for an instant before fading back into a kind of artificial twilight that leached all the color from the world. Somewhere behind us was Sam Hawkins, at home in shadow, discreet and quiet, and for once, considerately allowing our mood to remain unaffected by his sense of duty and honor. He’d be close by the room all night, alert and watchful. Knowing he was there, that he knew what we would be doing, didn’t embarrass or constrain me, couldn’t suppress the joy bubbling through me. Ned and I were together. Nothing else mattered.

As I closed the door of Room 12, I glimpsed Sam’s dark figure slip into a chair set in an alcove in the wall opposite. He would sit, silent as a sphinx, watching the door all night. I would wager a week’s takings at the coffeehouse that his aether pistol would be primed and ready in the hands resting on his knees. He took his responsibilities seriously, did Sam Hawkins. I didn’t worry about locking the door. Sam wouldn’t let anyone disturb us, and if there was an emergency and he needed to burst in, it saved him blowing the door down.

When I turned, Ned was waiting.