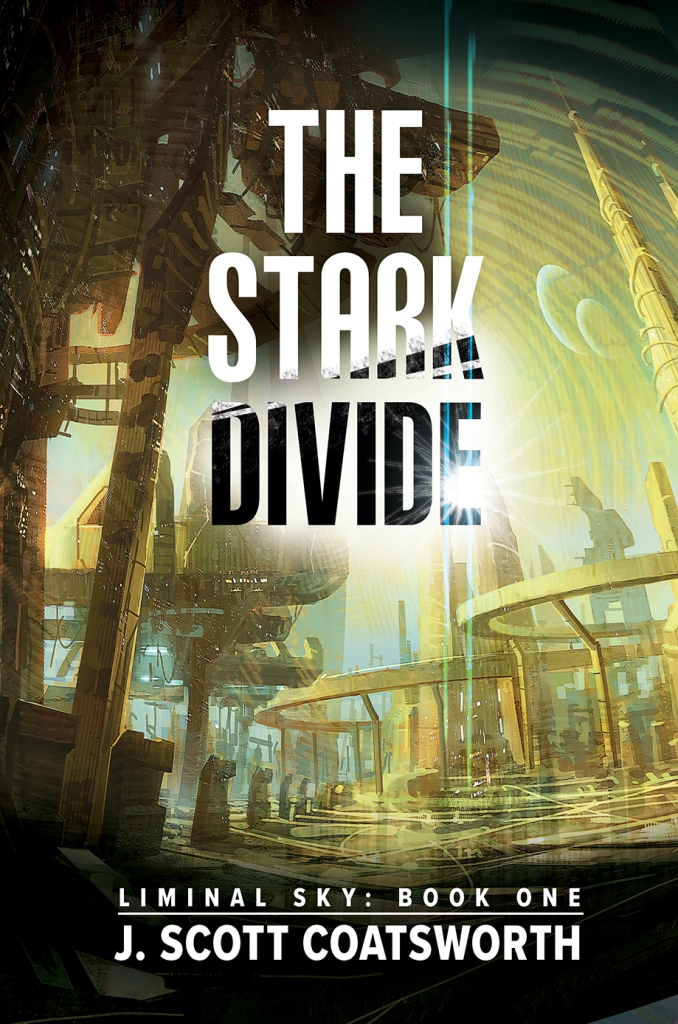 I’m delighted to host Scott here again, this time with his latest sci-fi release, The Stark Divide. My review of the book is here too, but just to get your appetite whetted, isn’t that a lovely cover!

This is quite a long post, and I’m proud to show off my new blogging skills with internal links (cough) so use these links if you’d like to jump to:

My first epic sci fi tale has just come out, and I thought it would be fun to look at one of the main “gimmicks” behind the book.

When I first came up with the concept of the world called “Forever”, I was knee deep in Anne McCaffrey’s Pern series. I loved the concept of “thread”, a worldwide threat that made her world different and gave her a unique threat that helped shape the planet’s culture.

I wrote part of a novel on a world called Antana (that is mentioned in my novella The Homecoming”) where floods come every 80 years… something to do with sunspots. Never worked out all the details on that one. LOL…

When I started on Forever, I wanted something that would make my world, a generation ship, stand out.

So I made the plants glow.

I needed something to provide light in the depths of space, and bioluminescence seemed like an amazing, magical way to go. As the series progresses, it will also lend itself to more of a fantasy feel that I’m going for.

Just for fun, here’s an excerpt from the first book I wrote about Forever, which takes place a couple hundred years down the timeline from “The Stark Divide.” It was never published, but I plan to tackle it again in a year or two:

Thalisa stepped carefully across the open floor between shards of broken glass to the window-frame, leaning forward to feel the cool morning air rush past her cheeks. No time for the danse today, she thought with regret.

Shake or no, she’d not miss the morning light.

A faint half-circle glow lit up the Darward horizon, along the narrow rounded ridge of the world, as daylight approached the Eyre Estate. A corresponding thrill raced up Thalisa’s spine to momentarily wash away her old regrets and anxieties. She breathed in the crisp morning air deeply, and watched avidly for the new morning to arrive.

Thalisa stood before the window, trying to feel the approach of light, that unknown signal that called the fir and apple trees and the high grass and redfern to give off their warm glow.

The wooden shutters were thrown wide open, and the cool early morning air blew in softly, touched with a hint of pine and the smell of fresh-turned earth from the fields of her Father’s estate.

She watched as the morning came, softly, silently, like a cat on padded toes, as the light hopped from stem to leaf, traced the edges of flowers, climbed the thick boles of fir trees along winding, vital vines, before finally settling down to a comfortable effervescent glow.

Soon her world would be filled with bioluminescent daylight from here to Thyre.

With a last great leap, the morning was at her window and then beyond, as the Estate orchards settled into their bright morning glow, and even the air itself shone as bits of pollen suspended in the breeze flared to glorious light.

She sighed; like yesterday and last week and all the days before, she felt nothing at its passing.

I hope you enjoy “The Stark Divide.” I’m working on the sequel, “The Rising Tide,” right now.

Some stories are epic.

The Earth is in a state of collapse, with wars breaking out over resources and an environment pushed to the edge by human greed.

Three living generation ships have been built with a combination of genetic mastery, artificial intelligence, technology, and raw materials harvested from the asteroid belt. This is the story of one of them—43 Ariadne, or Forever, as her inhabitants call her—a living world that carries the remaining hopes of humanity, and the three generations of scientists, engineers, and explorers working to colonize her.

From her humble beginnings as a seedling saved from disaster to the start of her journey across the void of space toward a new home for the human race, The Stark Divide tells the tales of the world, the people who made her, and the few who will become something altogether beyond human.

Humankind has just taken its first step toward the stars. 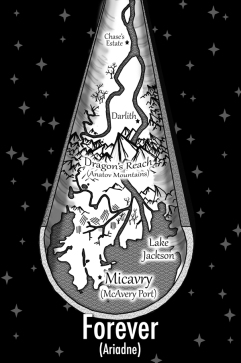 “DRESSLER, SCHEMATIC,” Colin McAvery, ship’s captain and a third of the crew, called out to the ship-mind.

A three-dimensional image of the ship appeared above the smooth console. Her five living arms, reaching out from her central core, were lit with a golden glow, and the mechanical bits of instrumentation shone in red. In real life, she was almost two hundred meters from tip to tip.

Between those arms stretched her solar wings, a ghostly green film like the sails of the Flying Dutchman.

“You’re a pretty thing,” he said softly. He loved these ships, their delicate beauty as they floated through the starry void.

“Thank you, Captain.” The ship-mind sounded happy with the compliment—his imagination running wild. Minds didn’t have real emotions, though they sometimes approximated them.

He cross-checked the heading to be sure they remained on course to deliver their payload, the man-sized seed that was being dragged on a tether behind the ship. Humanity’s ticket to the stars at a time when life on Earth was getting rapidly worse.

All of space was spread out before him, seen through the clear expanse of plasform set into the ship’s living walls. His own face, trimmed blond hair, and deep brown eyes, stared back at him, superimposed over the vivid starscape.

At thirty, Colin was in the prime of his career. He was a starship captain, and yet sometimes he felt like little more than a bus driver. After this run… well, he’d have to see what other opportunities might be awaiting him. Maybe the doc was right, and this was the start of a whole new chapter for mankind. They might need a guy like him.

The walls of the bridge emitted a faint but healthy golden glow, providing light for his work at the curved mechanical console that filled half the room. He traced out the T-Line to their destination. “Dressler, we’re looking a little wobbly.” Colin frowned. Some irregularity in the course was common—the ship was constantly adjusting its trajectory—but she usually corrected it before he noticed.

“Affirmative, Captain.” The ship-mind’s miniature chosen likeness appeared above the touch board. She was all professional today, dressed in a standard AmSplor uniform, dark hair pulled back in a bun, and about a third life-sized.

The image was nothing more than a projection of the ship-mind, a fairy tale, but Colin appreciated the effort she took to humanize her appearance. Artificial mind or not, he always treated minds with respect.

“There’s a blockage in arm four. I’ve sent out a scout to correct it.”

The Dressler was well into slowdown now, her pre-arrival phase as she bled off her speed, and they expected to reach 43 Ariadne in another fifteen hours.

Pity no one had yet cracked the whole hyperspace thing. Colin chuckled. Asimov would be disappointed. “Dressler, show me Earth, please.”

A small blue dot appeared in the middle of his screen.

“Dressler, three dimensions, a bit larger, please.” The beautiful blue-green world spun before him in all its glory.

Appearances could be deceiving. Even with scrubbers working tirelessly night and day to clean the excess carbon dioxide from the air, the home world was still running dangerously warm.

He watched the image in front of him as the East Coast of the North American Union spun slowly into view. Florida was a sliver of its former self, and where New York City’s lights had once shone, there was now only blue. If it had been night, Fargo, the capital of the Northern States, would have outshone most of the other cities below. The floods that had wiped out many of the world’s coastal cities had also knocked down Earth’s population, which was only now reaching the levels it had seen in the early twenty-first century.

All those new souls had been born into a warm, arid world.

We did it to ourselves. Colin, who had known nothing besides the hot planet he called home, wondered what it had been like those many years before the Heat.

This was a very interesting read. The premise of sentient spaceships isn’t new, of course, nor is the idea of a space ark as the refuge of the remains of humanity. But when the ‘ark’ is a created world, Forever, complete with mountains, rivers and farms, all held within a space ship grown from a seed and inhabited with sentient, aware, intelligent AI with ambivalent motivation… that’s a little different.

This is essentially a trilogy of interconnected novellas, with some reasonably large timeshifts between each segment. That didn’t actually bother me – I rather liked the feeling that each segment was clearly complete, and the jumps to the next segment at least did away with the need for pesky (and pointless!) transitions that wouldn’t have added anything to the plot. Instead, the author tells three tight, carefully structured tales that are woven together through the ensemble cast of characters and the book’s theme of mankind’s self-destruction

The least cheerful element of the overarching tale is that even with today’s lessons in front of us, humanity has learned very little, certainly not enough to improve the future. Earth is dying, devastated by ecological disaster and by war. All the issues we face today: demagoguery politics, climate change tackled too little and too late, war and the human cost, refugees, deprivation, prejudice… all are still problems in this future world. Not just problems, but world-killing events. No. Mankind doesn’t learn anything much at all. And perhaps the most depressing thing, is they take the problems with them to Forever.

Excellent worldbuilding, an ensemble of engaging characters and the promise of conflict to come. Very well done.

Scott spends his time between the here and now and the what could be. Enticed into fantasy and sci fi by his mom at the tender age of nine, he devoured her Science Fiction Book Club library. But as he grew up, he wondered where all the people like him were in the books he was reading.

He decided that it was time to create the kinds of stories he couldn’t find at his local bookstore. If there weren’t gay characters in his favorite genres, he would remake them to his own ends.

His friends say Scott’s mind works a little differently – he sees relationships between things that others miss, and gets more done in a day than most folks manage in a week. He loves to transform traditional sci fi, fantasy, and contemporary worlds into something unexpected.

He runs both Queer Sci Fi and QueeRomance Ink with his husband Mark, sites that bring queer people together to promote and celebrate fiction that reflects their own lives.