It’s a great pleasure to have Anne Barwell visiting today, to talk about why she wrote Prelude to Love, her latest release. Over to you, Anne!

Kind of a First

Thanks for hosting me today as part of my blog tour for Prelude to Love, a Dreamspun Desire novel from Dreamspinner Press.

I have a Rafflecopter running as part of the tour so be sure to enter.

Prelude to Love is a contemporary romance, which is something a little different for me. While it’s not my first—that honour goes to Sunset at Pencarrow co-written with Lou Sylvre—I’m usually more of a genre writer. I have stories set in contemporary times, but they usually have a fantasy element to them, whether it be portals to other worlds, or vampires and werewolves.
It’s also not my first New Zealand set story. Slow Dreaming (https://www.dreamspinnerpress.com/books/slow-dreaming-by-anne-barwell-2439-b)
released from Dreamspinner Press in 2012 takes place in Petone (a suburb of Lower Hutt in the Wellington region), but that one involves time travel.

After finishing a series set in WWII, it was a nice change writing something set close to home both in location and time period. While I enjoy all the research that goes with an historical, it was great to be able to focus on telling the story and listening to the characters without having to stop to fact check all the time. Prelude to Love is also a story that resonates with me as one of the main characters—Joel—is a musician and a music teacher so I was able to draw on my experience for both of those. His career is where I would have been if I’d continued with teaching, rather than changing direction and now working in a library. These days I tinker on the piano a bit at home in my very little spare time, and play violin for an orchestra rather than the full on involvement with church music and musical theatre of years gone by.

So, after writing—and co-writing—two contemporaries within a year, will I write more of them or return to the genres I usually write? The short answer is a bit of both. I have more contemporary romance stories I want to tell, but a couple of historicals keep whispering in my ear, as do my psi guys whom have been very patient for a little too long. I’m waiting for the other shoe to drop on the latter. I also have a couple of ideas that mix a contemporary romance with another genre. I’ve always enjoyed reading books which don’t stick to just one genre, and I write what I like to read. Otherwise what’s the point?

But in the meantime I have another co-written story to finish, and dragons wanting attention so now Joel and Marcus’s story is told, I’ll be spending 2018 on 18th century Skye, and in the fantasy world of Astria. With perhaps a very short SF diversion on the side. 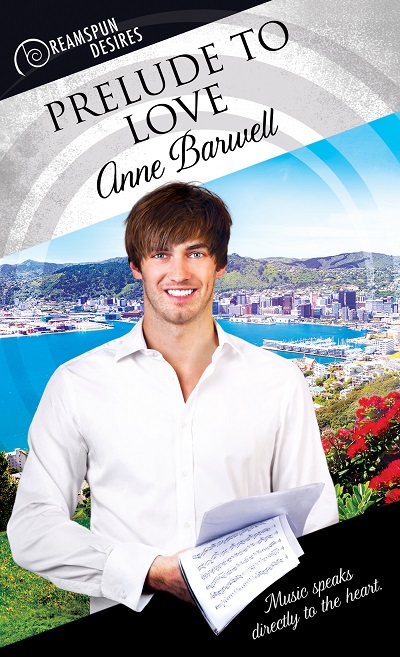 Music speaks directly to the heart.

Two very different men face turning points in their lives after the collapse of long-term relationships….

Joel is a music teacher who knows it’s time to forget his ex and move on, while Marcus runs a lawn-mowing business and has come to Wellington to escape the reminders of a recent breakup. Although they’re opposites, when Joel and Marcus connect, their romance has the potential to hit all the right notes.

Too bad neither of them feels ready for new love.

With family and friends in common, dating is risky—things could get messy if it doesn’t work out. The sweet song of possibility draws them to each other, though, and they share a kiss following a Chopin prelude. But it will take some practice and perseverance to find their perfect harmony….

Joel stood on the stage at the front of the orchestra. He looked up when the door opened, and smiled.

Several of the kids in the orchestra turned around to see what Joel was looking at. A couple of the girls sitting in the front row of violins glanced back at Joel and then again at Marcus, but didn’t say anything.

Joel cleared his throat. “Okay, let’s take that one from bar thirty. Everyone found that? It’s two bars before the first time bar, so we’re going to play from there and do the repeat. I’ll give you a bar for nothing.” He raised his baton. “One. Two. Three.”

The orchestra began playing one of the tunes Joel had been humming the week before.

Marcus found a seat at the front of the hall, next to a woman about his own age. She tapped her foot along with the music and kept her eyes on Joel more than the musicians did.

A few other adults sat around them, listening. One woman seemed absorbed in whatever was on her tablet, although she nodded in time with the music and looked up when the flutes began to play.

Probably parents come to pick up their kids.

Marcus suddenly felt the odd one out, although he didn’t regret coming. Joel had an intensity about him when he conducted that was missing when he gave piano lessons. Although he’d been focused on his students then too, this felt different. Conducting was something Joel clearly loved—it reminded Marcus of when Joel had played the prelude for him.

A trumpet blared, jarring Marcus from his thoughts.

Joel lowered his baton, and although most of the orchestra stopped, the kid playing the trumpet didn’t seem to notice.

“I think you’re a couple of bars ahead of the rest of us,” Joel said. “You’re sounding great, but it doesn’t quite work if you come in at the wrong place.” He spoke softly, so it didn’t sound like a reprimand.

One of the boys playing clarinet grinned, and the girl next to him giggled.

“Everyone makes mistakes,” Joel said. “Next time it might be someone else coming in at the wrong place. Even me.”

“Now,” Joel said, “I think we can run this through from where we were before, but this time we’ll just keep going until the end of the piece. So play the second time bar instead of the first. Okay?” 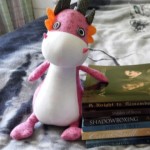 Anne Barwell lives in Wellington, New Zealand. She shares her home with two cats who are convinced that the house is run to suit them; this is an ongoing “discussion,” and to date it appears as though the cats may be winning.

In 2008 she completed her conjoint BA in English Literature and Music/Bachelor of Teaching. She has worked as a music teacher, a primary school teacher, and now works in a library. She is a member of the Upper Hutt Science Fiction Club and plays violin for Hutt Valley Orchestra.

She is an avid reader across a wide range of genres and a watcher of far too many TV series and movies, although it can be argued that there is no such thing as “too many.” These, of course, are best enjoyed with a decent cup of tea and further the continuing argument that the concept of “spare time” is really just a myth. She also hosts other authors, reviews for the GLBTQ Historical Site “Our Story” and Top2Bottom Reviews, and writes monthly blog posts for Love Bytes.

Anne’s books have received honorable mentions five times, reached the finals four times—one of which was for best gay book—and been a runner up in the Rainbow Awards. She has also been nominated twice in the Goodreads M/M Romance Reader’s Choice Awards—once for Best Fantasy and once for Best Historical.